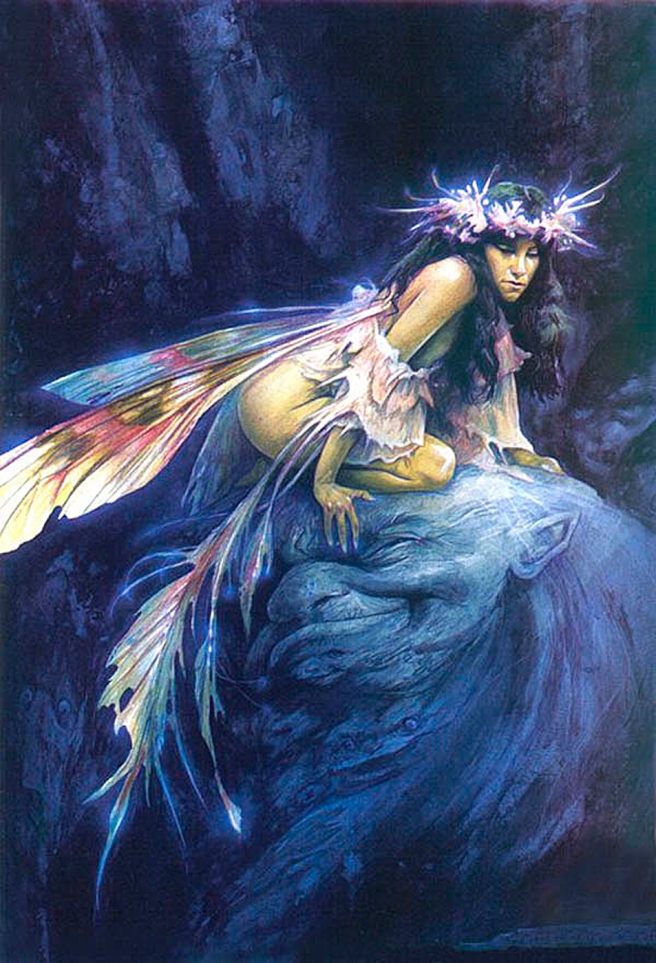 Our ancestors believed in a form of life called ‘fairy’; but how exactly did they conceive these beings? What was their physical form and nature (if they had one?)

Robert Kirk, in his Secret commonwealth, describes them variously as “astral” with “light, changable Bodies somewhat of the Nature of a condensed cloud” (s.1) and as being composed of “congealed Air,” which meant that they could not be physically wounded in the “fluid, active, aethereal Vehicles” which held them (s.7).  Kirk was Scottish and it seems that the general Highland belief  was that sidh were not flesh and blood but spirits who looked like men and women, albeit smaller in stature (see Evans-Wentz, The fairy faith in Celtic countries, pp.102, 104, 105, 109 & 114).  They had no solidity and a hand could pass straight through them, as if through a ghost.  The same was true in Wales (Wentz pp.138, 140 & 144); the popular conception was that the fairies didn’t have physical bodies and so could be caught.  They lived in a materially different sort of world which would change any human who visited (Wentz pp.144-145).  One Welsh account depicts them dancing on the tips of rushes, evidently being both tiny and insubstantial.

In more recent times perceptions have moved us even further away from the idea of fairies having a fixed, solid body.  The medieval fay steadily became more ethereal until we arrived at a point today where quite a few authorities say that they have no inherent form and simply borrow their appearance from whatever preconceptions they viewer carries in his her mind.  The fairies are purely ‘thought forms‘ who look just as we expect them to look.

This being so, it is strange then that it was accepted that ordinary mortals could have physical contact with fairies- dancing with them, nursing their babies and, indeed, fathering babies upon them.  Katharine Briggs wrote that fairies “are apparently near enough in kind to mate with humans- closer in fact than a horse is to an ass, for many human families to claim fairy ancestry” (see her The fairies in tradition and literature p.95). Maybe there was some distinction between the physical nature of the human sized and smaller fairies.  Maybe there were regional differences or simply some inconsistency in understanding.  Generally, the idea seems to be that faery folk are as real and tangible as we are: they can jostle and pinch humans, they can fire projectiles at them; in other words, faery is a parallel or neighbouring world that is just as corporeal as our own.

It is also notable that fairies would steal human food (and children), so presumably they ate the same things as we did.  We know that fairies drank wine and cider and made their own food such as cakes and bread.  David Parry-Jones in his Welsh Legends even records the fairies operating their own inn near Pwllheli.  Nonetheless, contrary beliefs were also held: in Cymbeline (III, 6) it is said of Imogen “But that it eats our victuals, I should think/ Here were a fairy.”

Unfairly, it appears that fairies can eat human food without injury, whereas a human tasting their food could be entrapped for ever- see for example the Cornish tale of the Fairy dwelling on Selena moor, in which a bite of a plum or a sip of cider would be fateful. Fairies can be fussy about human culinary efforts, however.  John Rhys presents a series of stories in which  lake maidens (gwraggedd annwn) repeatedly rejected human suitors because the bread they offered was either overbaked or underbaked- too hard or too soft (John Rhys, Celtic folklore pp.4, 28 & 30).  It took a fine judge of baking times to win a faery heart.  The fairies had a particular preference for dairy products, leading to speculations that they are vegetarian.

This Cornish story of Selena Moor also points up another physiological fact: fairies appear to be poor breeders.  The captive maid in the story, Grace, says that only very occasionally is a fairy child born, which then is a cause of great rejoicing.  A similar account is given by Angus McLeod of Harris in Wentz (p.116) who sadly remarked that “There is not a wave of prosperity upon the fairies of the knoll, no, not a wave.  There is no growth or increase, no death or withering upon the fairies.  Seed unfortunate they!”  It is to reinforce the weak fairy gene pool that babies are stolen as changelings and that human lovers are taken- a theme I exploited in my own fairy story The Elder Queen.

Actual physical appearance varied from one ‘species’ or type of fairy to another.  Some were envisaged as old men, some as ugly, hairy creatures, and some as tall and beautiful women.  Some were average human height, some were the size of children and some were very small indeed, minute enough to dance around a glow-worm according to one Welsh account; another describes them as being the size of guinea pigs (!).  Angus Macleod of Harris eulogised as follows: “Their heavy brown hair was streaming down to their waist and its lustre was of the fair golden sum of summer.  Their skin was as white as the swan of the wave, and their voice was as melodious as the mavis of the wood, and they themselves were as beauteous of feature and as lithe of form as a picture, while their step was as lithe and stately and their minds as sportive as the little red hind of the hill.” (Wentz p.116)

Whatever the irresistible beauty of fairy maidens, we should be aware of the fact that fairy folk sometimes bore bodily defects that disclosed their supernatural identities. This is marked in Scandinavian folklore- for example, the elle maidens dancing near the elder thickets had alluring faces but were hollow behind (see too The white goddess & the elder queen) and the huldre folk had cow’s tails.  In Britain, this is a less common theme but, for example, Highland glaistigs wore long dresses to cover their hooves; a few other Scottish fairies were similarly marked and their true natures betrayed.

Lastly, it is natural to enquire as to life span.  The Reverend Kirk expressed the opinion in section 7 of his Secret Commonwealth that “they are not subject to sore sicknesses, but dwindle and decay at a certain period, all about ane Age.”  In other words, the fairies are not immortal.  It is certain that they fight wars and can slay each other.

In Cornish tradition the fairies’ exercise of their shape-shifting power had a serious side effect: each time they resumed their normal appearance they got smaller, so that over time they dwindled away until they reached the size of ants and were, essentially, lost.  It is worth observing in this connection that in Cornwall and the South west of England, the pixie or pisky was always considered in any case to be a diminutive being: the Cornish term was an pobel vean- the little people. Accordingly, they started at a disadvantage before they even employed their magic powers!

An expanded version of this posting is found in my book British fairies (2017).  I have here mainly concentrated on our ideas about fairy bodies- size, shape, weight, etc; in several separate postings I discuss how we have conceived fairy beauty– their age and their sexuality.  I’ve also examined fairy shape-shifting as well as the debate over the extent to which fairies look like we expect them to.

10 thoughts on ““Oh, that this too, too solid flesh would melt”- fairy physiology”