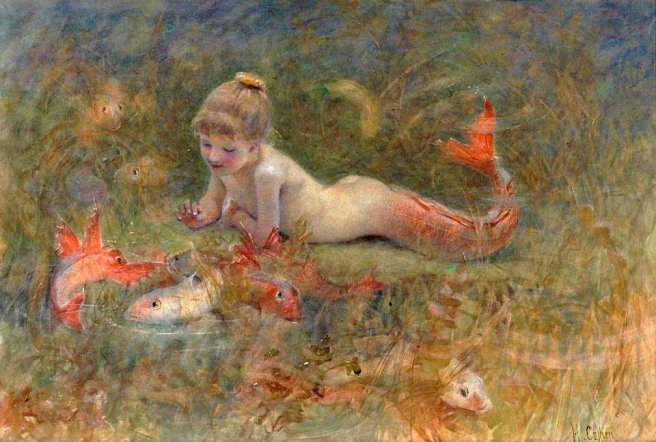 A long time ago, in an early posting on this blog, I discussed mermaids; I want now to return to the subject with some further reflections and information.

Just like fairies, elves and pixies, it is very notable how the popular image of mermaids has improved and how they are coming to be regarded as wholly cute and attractive figures of myth.  The illustrations to this posting by Hector Caffieri demonstrate an early stage in this trend; perhaps the best known contemporary example might be Disney’s Ariel, the little mermaid.  In passing, it may be worthwhile making an additional observation on visual conventions.  The cartoon Ariel, for one, is sanitised and winsome.  Caffieri’s ‘Siren’ above is likewise a small girl, but it’s notable how the standard image has changed in the last century or so.  Today, the fish scales extend to the waist; in Victorian times (as can be seen) they often started somewhat lower, requiring a more discrete treatment (or perhaps a chance for a little titillation).

Today, mermaids are viewed wholly as figures suitable for children to like, draw and to imitate, with mermaid tails being a widely available form of fun beach wear.  It seems very likely that this more benign idea is derived from Hans Christian Andersen’s 1837 story of The little mermaid.  The main character in this is presented as a model of Christian self sacrifice and goodness and has doubtless had a pervasive influence commensurate with the story’s popularity.  For modern generations, the aforementioned cartoon version of the story from Disney has profoundly influenced popular views of marine supernaturals since its release in 1989.  Other symptoms of these revised views of merfolk may be the 1984 film Splash starring Daryl Hannah and the very recent appearance of female entertainers playing mermaids for parties and corporate events.

Whilst terrestrial fairies have been the subject of prettification and miniaturisation since the late sixteenth century,  this process has only been applied to mermaids during the last century and a half.  The consequence is that a great deal more of the older folklore attitudes survive, both in stories and in poetry.  Mermaids are still supernatural creatures deserving of awe, fear and mistrust.  Kindliness was never one of the mermaid’s traditional traits and it is still not how other supernatural water beasts are perceived.  In this respect, the dependable J K Rowling gives us a depiction more observant of folklore in Harry Potter and the Goblet of Fire (there called grindylows).  It may be easier for us to identify with and to find attractive qualities in a being that lives solely on land; mermaids live in a different element in which a human cannot survive and this important distinction may help to preserve their distance from us and our healthy respect for that difference. 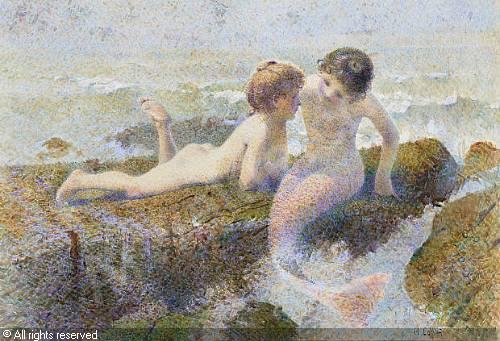 It’s also inescapable that most mermaids are depicted as young, beautiful, naked women.  There’s probably a lot of psychology here if you’d like to find it.  This iconography may tell us about relations between men and women: the separation between elements may be a metaphor for the difference between the sexes.  It may equally just have something to say about sex more generally- that physical attraction is powerful, but dangerous; that we are entering a new and exposing environment when we entrust ourselves to another individual; that the lure of the strange and mysterious is strong but perilous.   As with all supernatural partners, love for mermaids is enticing but full of risk: what is placed in jeopardy may be long term happiness, your present way of living and connections or, even, life itself.

Irish poet Francis Hackett (1883-1962) captured many of the conventional traits of the mermaid in his poem Sea dawn:

“From Wicklow to the throb of dawn
I walked out to the sea alone
And by the black rocks came upon
A being from a world unknown.

As proud she sat as any queen
On high, and naked as the air:
Her limbs were lustrous, and a sheen
Of sea-gold flowed from her flowing hair.

And as the spreading sea did swell
With dawns strange and brimming light
Her little breasts arose and fell
As if in concord with the sight.

Faint was the sea sound that she made
Of little waves that melt in sand
While with her honey hair she played
And arched the mirror in her hand.”

This evocation of adolescent allure may well now trigger thoughts of the recent controversy concerning J. M. Waterhouse’s painting Hylas and the nymphs and its temporary removal from the walls of Manchester City Art Gallery.  Both the picture and Hackett’s verse are of a piece and represent one powerful current of thought on mermaids and their nature.

Across the world, there are several themes common to tales of merfolk.  The principal of these are as follows:

As is the case in contact with all supernatural beings, involvement with merfolk is generally risky and involves an imbalance of power.  Romantic attachments can be fatal whilst any information or ability gained from them is only obtained through coercion, whether that is bribery or physical force.

To repeat, as with the improvement in the character of fairies, the changed perception of merfolk is a relatively recent amelioration.  Evidence of the earlier, much more dangerous, nature of these beings is still to be found in the Scottish accounts of water horses (associated with salt water), water bulls and other water beasts like kelpies, which are found in freshwater lochs.  Their main occupation, it seems, is seducing mortals and luring them to their doom.  James Hogg’s 1819 poem The mermaid is representative of this:  the Maid of the Crystal Wave lures a young man to ‘places he should not have been and sights he should not have seen’ and it proves to be his ruin.  Similarly in Charles Mackay’s 1851 ballad The Kelpie of Corryevreckan a handsome stranger on a horse rides off with love-struck Jessie, but then plunges beneath the waves with her, so that she is found drowned the next day.  Poet Joseph Rodman Drake in his verse, To a friend, described travellers being terrorised by “the kelpie’s fang.”

It is notable that whilst mermaids might accidentally drown their lovers, it is not generally their intention, whereas the character of the water beasts is specifically to seek out humans in order to destroy them.  In light of this, there is perhaps a case for excluding the latter from the category of ‘fairies.’ Mermaids are semi-human in form; the kelpie can take on human form whilst the water horses appear as animals alone and may be better described as monsters.

Lastly, what is particularly notable is the Highland Scottish link between water creatures and horses.  Exactly why this should have been made is far from clear, but it is to be found across Northern Europe in Scandinavian folklore, from Iceland through to Denmark.  It seems very likely that Viking settlement introduced this idea into the north of Scotland.

As mentioned, I posted before on the risks of loving mermaids and water beasts and I have also discussed catching the fleeting and vulnerable asrai.  Mermaids are more than pretty faces, though: see my post on mermaid wisdom and my posting on Gwenhidw, the Welsh mermaid queen. See too my discussion of freshwater mere-maids and of of Charles’ Kingsley’s famous novel, The water babies.

As soon as I saw the cover of this new book, I knew I wanted to read it.  The gothic William Morris design in bold red, black and yellow grabbed my eye and convinced me, even before I’d picked it up, that it would be of interest.

I was right.  The story concerns the fictional island of Neverness and the small community living there.  Told in a succession of brief episodes that gradually intertwine and- it becomes apparent- stretch out over decades, the novel has a strange aura of mystery and magic, yet these are at the same time deeply incorporated into the everyday lives of the island dwellers.

It’s not exactly a fairy story nor is it about fairies, but there is a supernatural presence throughout.  There’s a witch, talk of changelings, a shadowy ‘Gorse Mother’ lurking deep in the thickets, there are hallucinatory drugs and there’s a ‘water bull,’ the scary and dangerous taroo-ushtey of the Isle of Man and tarbh uisge of Highland Scotland.  This supernatural water creature seduces and carries off one of the local girls.  His love is intoxicating, irresistible- and fatal.

The story is beautifully told, fast paced and enjoyable.  Worth a read.

See a list of my own faery titles, here. 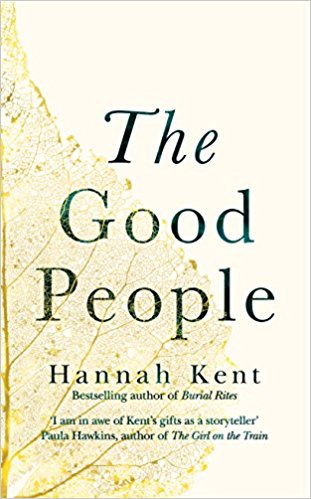 A fiction addition to my ‘fairy bookshelf.’

I generally occupy the same seat in the library where I frequently work  and on the shelves opposite me in the fiction section was a hardback book, The good people by Hannah Kent.  As soon as I saw the title, I knew it would be a fairy-themed story, as those ‘good people’ are the daoine maithe in Irish Gaelic.

Having a lull in my research, I took the book out and read it in a few days.  It is a very well written tale (literary, elegant and inventive) about life in the west of Ireland in the mid-1860s.  It is not a fairy story as such, but it examines the social impact of a belief in a fairy presence and in magically induced illness and ill-fortune.

A sick and disabled child is identified as a changeling: on the one hand the family of the infant take increasingly desperate steps to expel the fairy and to recover the lost boy from under the fairy hill; on the other hand the wider community blames the changeling child as the source of a run of bad luck and poor harvests in the valley where they live.  The damaging impact of these beliefs on individuals and social relationships is what Kent examines so well in this novel.  The account is based on a true story, in every way as tragic as the burning of 26 year old Bridget Cleary in 1895- she was a woman whom her husband and neighbours had become convinced had been abducted by the local sidhe folk and who had to be recovered by means as violent as those inflicted upon baby Micheál in Kent’s story.

The good people is a very well structured and well told novel.  Kent may not be a believer, but her account of fairy belief in Ireland in the mid-nineteenth century is highly detailed and beautifully articulated.  A recommended read.

See a list of my own faery titles here.