I could have chosen quite a number of beasts to discuss, as many wild and domesticated breeds have been seen as fairy animals, but I have a decades old affection for goats.  I’ve never yet owned or cared for one of the creatures, but I’ve always wanted to and I’ve not given up my aspirations yet!

There’s something about a goat (its inquisitive nature, its toughness, its cheekiness, its omnivorous taste for chewing anything- including your clothes-  and the way they sneeze on the pollen in meadows) that draws you and gives them a character that sheep wholly lack.  Our forebears appreciated this too and so goats have fairy associations all over the British Isles. 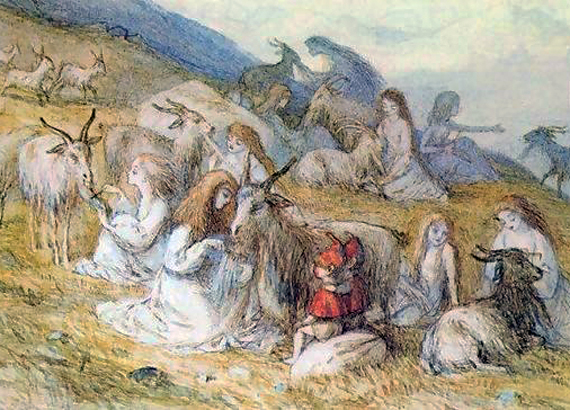 Whilst the association made between fairies and goats is to be encountered in folklore from Highland Scotland all the way down to West Cornwall (what we might call the ‘Celtic fringe’) some of the best evidence is from Wales, as set out in Sikes’ British Goblins, chapter 4.

The bad-natured female fairies, the gwyllion, were closely linked with goats, which were themselves esteemed for their occult knowledge and powers.  The Tylwyth Teg were said to comb goats’ beards every Friday so as to make them presentable on Sunday (a curious notion that says more about Welsh religiosity than the faith of the fairies).  In the tale of Cadwaladr’s goat, Jenny the female goat turned out to be a fairy maiden in disguise, who led Cadwaladr to the court of the fairy goat king.

Keightley gives the Highland tale of the Tacksman of Auchriachan.  It is a story of fairy theft from the tacksman (tenant farmer).  He hears the fairies in their knoll planning their pilfering whilst he is far away from his home “in search of our allies, the goats.”

There may be a connection here with the devil; the horned goat is a well-known symbol of Satan.  It is notable, too, that in Highland Scotland, at least, there was a belief (reported by some of Evans Wentz’ informants) that the origin of fairies was as fallen angels whose descent ended on the earth surface rather than in hell.  Additionally, in western symbolism the goat represents lust and lubricity, so that it may be a trope for fairy wantonness.  The horns might also denote supernatural power (see J. C. Cooper, An illustrated encyclopaedia of traditional symbols, Thames & Hudson).

Whatever the exact nature of the goat’s supernatural affinities, I decided to make use of them in my children’s story, The Derrick.  Set in Dorset, there is a strong tradition in Britain, and in the South-West of England in particular, of being ‘pixy-led’ astray by either the Will of the Wisp or by mischievous pixies. Turning an item of clothing inside out is often the only remedy to find your right way home again.  In my story the main characters. Thom and his brother, are led astray one evening by faery goats.  They are the first sign that the farm where the boys are spending their holiday is under the spell of faery. 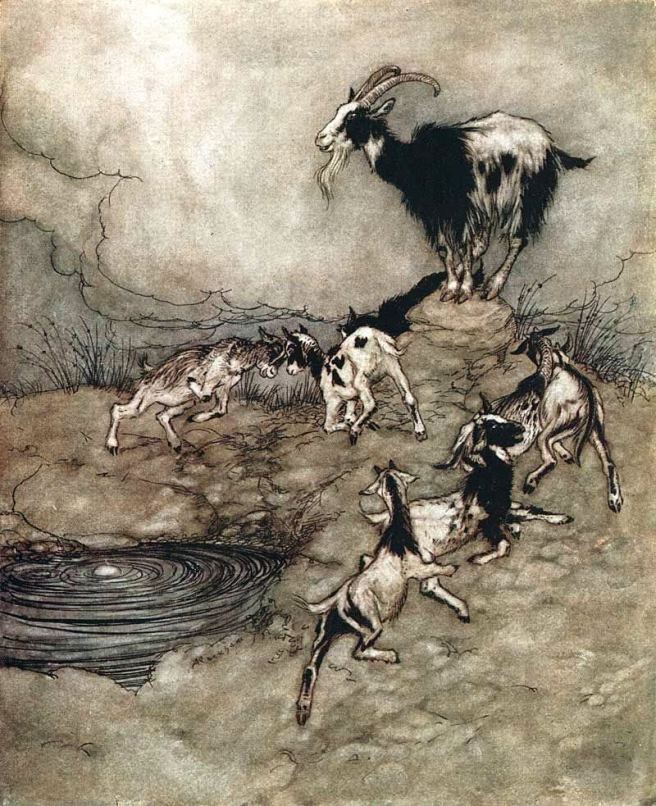 Arthur Rackham, The wolf and the seven kids.