Charles Hutton Lear, A glimpse of the fairies,

There is a body of opinion that fairies have no fixed, physical form and that when they appear to us they shape themselves to our expectations.  This notion first seems to be mentioned in a fairy context by W B Yeats in his introduction to Fairy and folk tales of the Irish peasantry (1888).  Many generations of mystics and occult writers have acknowledged the existence of spiritual beings, he wrote- beings “who have no inherent form but change according to their whim, or the mind that sees them.”

Yeats did not originate this idea.  Early on, Theosophists had formulated the concept of ‘thought forms.’  Mahatma Koot Humi, one of Madame Blavatsky’s mentors and inspirations, wrote that “thoughts are things… they are real entities.”  This idea was elaborated by Charles Leadbeater and Annie Besant in a book, Thought forms, in 1905; they asserted that thoughts produced a radiating vibration conveying their emotion and also had a floating form.  The idea was then transferred nature spirits and elementals.  To become visible, they assume etheric bodies, which are shaped by folklore stories and human imaginations.  Robert Ogilvie Crombie of Findhorn explained that, although its natural form is a swirl of light, an elemental “can put on any of these thought forms and then appear personified as that particular being … elf, gnome, faun, fairy and so on.”[1]  Edward Gardner had a related but different conception.  He believed that Elsie and Frances at Cottingley had abilities akin to mediums.  They could materialist the fairies they photographed through ectoplasm, which was the explanation for their contemporary appearance.

The idea of the thought form was developed in relation to fairies by Geoffrey Hodson in Angels and the new race (1929).  He asserted that fairies have no physical body but are formed of light, albeit along the ‘same model’ as humans.  In The kingdom of the gods in 1952 Hodson elaborated on these ideas: the archetype for the fairy form was the human body and their appearance was further determined by our expectations as to what we might see.

“It’s often thought that faeries use our own thought patterns to manifest themselves.  For example, when a faery appears to a person, it will typically look quite similar to the creatures you see in storybooks.  This is because if you were to see a ball of energy, would you really know it was a faery?  No.  So they try to ‘speak’ our visual language.  We see wings, and flowing dresses, and heads and eyes.  The problem is, we think we’re just making it up.”

Likewise in The faery faith by Serena Roney-Dougal, she discusses how our psyche may create some of the things we see (pp.67-71).

I have to admit that I feel uncomfortable with this idea, for several reasons:

Lastly, and most importantly, the theory is hard to square with cases which appear to be accounts of genuine encounters with solid and physical fays.  If fairies are solely balls of energy it’s difficult to reconcile this with the cases where their physical presence was either central to the plot or appeared already to be established before the human encountered them.  I am thinking here of the cases where humans and fays have entered into sexual relationships and where children have been borne of these pairings- children who often must be physically delivered by human midwives attending a faery knoll.  I also am thinking of cases where fairy celebrations have been stumbled upon accidentally by people- the many cases where the fairies have been found dancing and then lured in human partners, or the stories of fairy feasts discovered under fairy hills. In one story told by William of Newburgh, readers may recall, the man who discovered the celebration also managed to make off with a gold cup.  Elsewhere I have discussed the transmission of fairy powers by the medium of touch.  As a last example, I note Morgan Daimler’s discussion of fairy familiars on p.162 of her Fairy faith: she stresses that these familiars were “clearly visible to the witch as tangible presences, not dreams or see-through illusions…  they were real-world manifestations that were seen, heard, and spoken to, in the waking world.”

These are all very solid incidents where the human form of the fairies was central to the incident and also, as I’ve suggested, already established independent of any Schrödinger like observation. 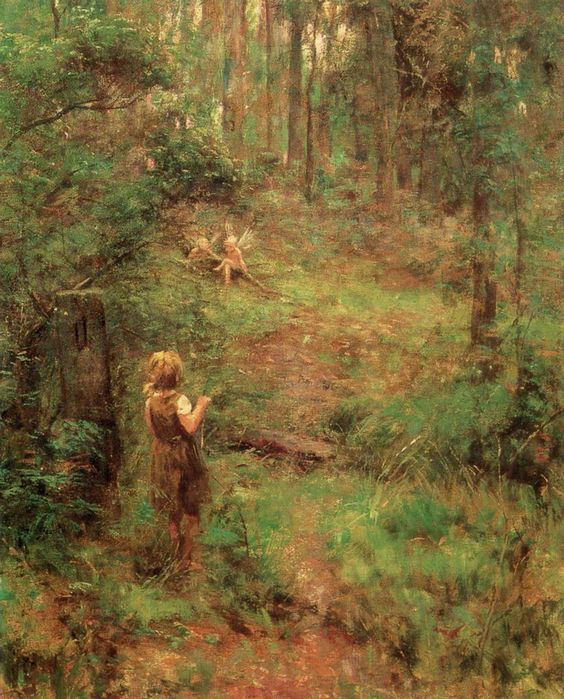 Frederick McCubbin, What the little girl saw in the bush, 1904

Our forebears definitely conceived of the fays as real and tangible- and so consistent in their appearance that classification into standard groups was possible and remained applicable over hundreds of years.  Any mutability in their appearance was purely of their own making- the result of their magic and glamour.

There were , of course, many who dismissed faeries as entirely illusory and imaginary, but this was for quite different reasons.  Rationalists challenged fairy belief on the grounds that it was self-delusion:

“Rainbow castles in the air/ Fit enough for fays and elves/ But not for mortals like ourselves.” (Martin Farquhar Tuppe, Liberty- Equality- Fraternity); or,

“That which belongs to neither heaven nor hell./ A wreath of mist, a bubble of the stream;/ Twixt a waking thought and dream…” (Sir Walter Scott, The kelpy).

All of that said, if fairies are but mutable forms responding to our own thoughts, it would explain their evolution in recent centuries, whereby they have acquired wands and wings and come to look like the leprechauns and flower fairies of contemporary culture.

This is a very difficult area and I can’t offer any definitive metaphysical solutions.  What do readers feel?  In short, do fairies look like fairies because they have a consistent and identifiable appearance or because they match themselves to whatever they find in our heads- be that Cicely Mary Barker or Henry Fuseli?

I look at the question of fairy weight again in another posting whilst my posting on the question of who believes in fairies touches on related questions of belief and reality.  Whether or not fairy form changes according to our expectations, it’s certain that some fairies can shape-shift themselves.

5 thoughts on “‘Just made up?’ The problem of fairy physicality”