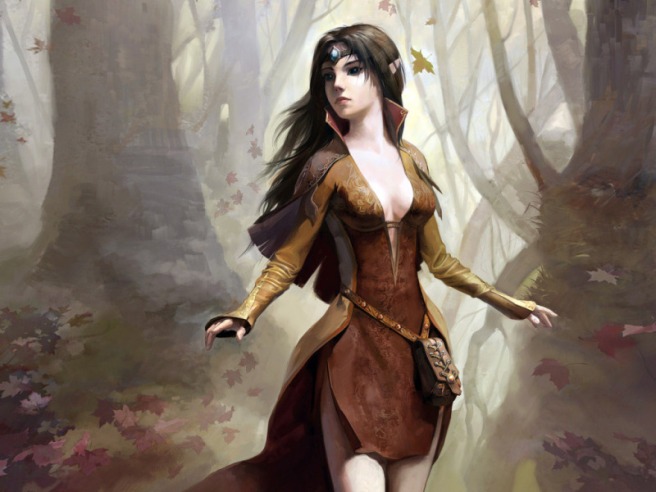 Today probably most people, if asked, would imagine elves and fairies gambolling in a woodland setting.  This appears to have become a very strong convention within our popular visual culture, yet it is not traditional to British fairy lore (despite a few links between fairies and particular trees, most notably in Gaelic speaking areas where the fairy thorn has particular power and significance- see for examples poems of this name by Samuel Ferguson and Dora Sigerson Shorter). I wish therefore in this posting to examine how this prevalent image came about.

Although the fairy king Oberon is met in a forest in the thirteenth century romance epic Huon of Bordeuax, but I believe the primary source of our close association between fairies and forests is Shakespeare, both the ‘wood near Athens’ which features in Midsummer night’s dream and in which Titania, Oberon, Puck and the other fairies make their home, and the open woodland of Windsor Great Park that features in the Merry Wives of Windsor and which is the scene of Falstaff’s believed encounter with the fairy queen and her train.  Whilst their ultimate roots may lie with the dryads and hamadryads of classical myth, it was these theatrical presentations of fairies that first really fixed the woodland elf in the English speaking public’s imagination.  Much subsequent literature and visual art has cemented the pairing to the extent that it appears inevitable, but there is little trace of it in older sources or in British folklore.

The British fairy, according to older writers, could be found in a variety of locations.  They frequented mountains, caverns, meadows and fields, fountains, heaths and greens, hills and downland, groves and woods.  Generally, they were more likely to be found in ‘wild places.’ Residence underground- whether in caves or under hills- is a commonly featured preference and I have often mentioned the presence of fairies under knolls and barrows.  Woods feature in these sources, it’s perfectly true, but they are far from the most commonly mentioned locations.  (I have considered here Reginald Scot, Burton’s Anatomy of melancholy, Bourne’s Antiquitates vulgares and a few medieval texts.)  The South English legendary of the thirteenth or fourteenth century is especially interesting reading in this connection: elves are seen, we are informed, “by daye much in wodes… and bi nightes ope heighe dounes…”- in other words, they frequent woods during the day (presumably for concealment from human eyes) but resort to open hill tops at night for their revelries.

A particularly relevant source is the Welsh minister, the Reverend Edmund Jones. In his 1780 history of the superstitions of Aberystruth parish he recorded the contemporary views locally on the most likely locations for seeing fairies.  They did not like open, plain or marshy places, he reported, but preferred those that were dry and near to or shaded by spreading branches, particularly those of hazel and oak trees (The appearance of evil, para.56).  Jones’ description fits the open oak parkland of Windsor perfectly, where Falstaff is duped by those merry wives and their gang of children disguised as elves.  It’s also notable that Wirt Sikes in his British goblins locates the Welsh elves (ellyllon) in groves and valleys.  In Wales at least, then, an open wooded landscape was believed in popular tradition to be the fairies’ preferred habitat.

Woods were one of the favoured resorts for the fairy folk, then, but not their sole preserve.  It seems to be in Victorian times that woodland elves became the cliche that we encounter today.  I have (for better or ill) read a lot of Victorian fairy verse and certain stereotyped images are very well worn: moonlight, dancing in rings, woodland glades.  Here are just a few examples to indicate what you’ll see ad nauseam.  The connection begins to appear in the eighteenth century (see for example the “fairy glade” of Sir James Beattie’s The minstrel and The palace of fortune by Sir William Jones, 1769). References multiply throughout the next hundred years and into the last century: the “sylvan nook where fairies dwell” of Janet Hamilton’s Pictures of memory; Ann Radcliffe’s “woodlands dear” and “forest walks” in Athlin and The glow-worm; the “woodways wild” of Madison Julius Cawein’s Prologue and the “fairy wood” in his Elfin; the “woodland fays” that appear in George Pope Morris’ Croton Mode.  By then well-established, these fays persisted into the twentieth century, in “some dark and mystic glade” of Tennessee Williams’ Under April rain or the “nymphs of a dark forest” of Edna St Vincent Millay.  All of this imagery transferred to the visual arts, too, especially to the illustrations of children’s books.

Once this image was embedded in the culture, it proved almost impossible to eradicate.  J. R. R. Tolkien absorbed it and the Silvan or Wood Elves of Lord of the Rings are the result; Galadriel is one of the Galadhrim (the tree people) of Lorien.  Tolkien’s influence in recent decades has been extensive and powerful.  An example might be Led Zeppelin, whose own highly influential Stairway to heaven invokes images of fairyland where “the forests shall echo with laughter.”  The pervasive idea was that the natural habitat of the fairy is the forest.

It might not be inappropriate to conclude with more lines from infant prodigy Hilda Conkling.  In If I could tell you the way she described how-

“Down through the forest to the river
I wander…
Fairies live here;
They know no sorrow.
Birds, winds,
They are the only people.
If I could tell you the way to this place,
You would sell your house and your land
For silver or a little gold,
You would sail up the river,
Tie your boat to the Black Stone,
Build a leaf-hut, make a twig-fire,
Gather mushrooms, drink spring-water,
Live alone and sing to yourself
For a year and a year and a year!”

For a wider consideration of the relationship between fays and trees, see Neil Rushton’s posting on dead but dreaming on the metaphysics of fairy trees.  See my other postings for thoughts on eco-fairies and fairies at the bottom of your garden.