This question may seem a shocking challenge to accepted conventions, but reflecting recently upon a couple of postings concerning the queens of elfland made on Living liminally by Morgan Daimler, I suddenly began to wonder whether we really mean the words we use when we so casually discuss the ‘fairy kingdom,’ the ‘faery realm,’  the seelie and unseelie ‘courts‘ and the king and queen of fairy.

Elsewhere, in her recent book Fairies, Morgan observes that “the social structure does seem to operate as a hierarchy ruled ultimately by Kings and Queens.” (p.61)    This is quite true, but as I have suggested before in my post on woodland elves, the idea of fairy royalty is very much a projection of medieval structures by medieval writers.  The idea was first seen in such poems as Huon of Bordeaux, King Herla, Sir Orfeo and in the verse of Chaucer: Sir Thopas and the prologue to the Wife of Bath’s tale.  Two centuries later, Spenser, Shakespeare and Herrick cemented the idea in our culture.  Neil Rushton has recently reiterated this interpretation in a posting on his ‘Dead but dreaming’ blog, Faeries in the Arthurian landscape, in which he observes that:

“The stories were consumed by the small proportion of literate population, and were codified accordingly to suit their social expectations. The appearance of characters with supernatural qualities within these stories had, therefore, to adhere to certain doctrines, which would be acceptable to their social mores and belief systems.”

As Neil implies, when we think of fairies now we almost unconsciously and automatically conjure images of Arthurian knights and ladies and all the structures of precedence and privilege that go with them.  This is habit, but is it any more than that?

We are very used, then, to thinking of Queen Mab and of Oberon and Titania.  But what need, though, do the faes really have of rulers?  In the Middle Ages, monarchs were required to perform several purposes within their simpler states:

None of these functions seem especially essential to Faery as we generally conceive it.  Is the title of ‘queen’ therefore redundant, or at best merely a convenient honorary title? 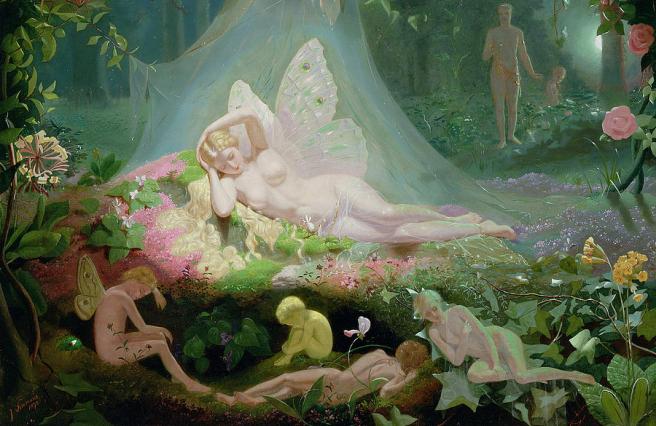 There sleeps Titania, by John Simmons

Let’s consider the views of the Reverend Robert Kirk, who certainly seems to have been well placed to know what he was talking about.  Writing in the late 1680s, he titled his justly famous book The secret commonwealth of elves, fauns and fairies.  A ‘commonwealth’ can merely denote a nation state or polity, but it can also more narrowly have the meaning of ‘republic.’  Given that he cannot but have been aware of the English Parliamentary ‘Commonwealth’ that succeeded the execution of Charles I in 1649, I think it’s inescapable that this was the connotation intended by Kirk when he chose to describe his subject matter.  That seems undeniable when we read at the head of chapter 7 that “They are said to have aristocraticall Rulers and Laws, but no discernible Religion, Love or Devotion towards God…  they disappear whenever they hear his Name invocked…”   We note Kirk’s belief in their aversion to church and religion, but also his conviction that they inhabit some sort of democracy regulated by rules of conduct of some description.

Much more recently, Theosophist Charles Leadbeater wrote that humans frequently mistook fairy leaders for kings and queens, whereas “In reality the realm of nature spirits needs no kind of government except except the general supervision which is exercised over it [by devas].” (The hidden side of things, 1913, p.147).

Perhaps those termed king and queen in Faery are simply those of the most distinguished character or the greatest magical power.  This was my conception of Queen Maeve in my story Albion awake!  In chapter 9, in response to being called Fairy Queen, Maeve replies:

“So you call me- but if I am a queen, I have no dominion.  I have powers, but I do not reign.  My people are a commonwealth- a secret commonwealth.”

Plainly I’ve stolen her phrase here!  Later she calls her people her ‘Nation Underground.’  I’ll let you track that reference down yourselves!

In conclusion, the main influence upon our conceptions of Faery as a stratified and monarchical society, with a royal family, a court, nobility and attendants, seems to be European society during the medieval period, channeled through contemporary literature.  Whether we are thinking of mythical Iron Age Ireland, Chaucer’s England or the France of Chretien de Troyes or Marie de France, their aristocratic society provided a model that was unthinkingly imposed upon fairyland.  It seems unlikely that the ‘common folk’ necessarily shared this; indeed, a large number of fairies were independent and individual characters or were conceived as members of their own, very local community.  Should we continue to talk of kings and queens then, or is it simply habit?  Do the terms have anything to do with contemporary perceptions of fairy?  What do readers think?

An expanded version of this text appeared in my book, Faeries, published by Llewellyn Worldwide in 2020.  For more on faery queens, see too my 2022 book with Green Magic Publishing, Who’s Who in Faeryland.

13 thoughts on “Is there a fairy queen?”