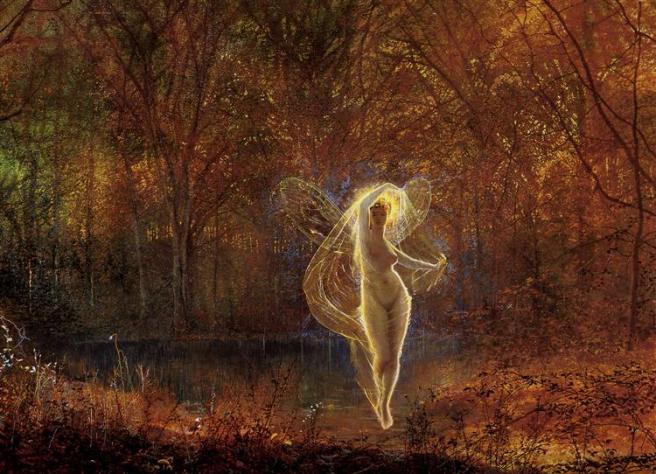 Ever since Peter Pan appeared on the stage in 1904, the idea of fairies as flitting points of light has been fixed in the popular imagination.  This post looks at the facts and the fiction of these perceptions of faery.

In contrast to her theatrical representation, in his book of the story of Peter Pan, J. M. Barrie imagined Tinkerbell as a full physical creature. For example, she is described as being-

“exquisitely gowned in a skeleton leaf cut low and square, through which her figure could be seen to the best advantage.  She was slightly inclined to embonpoint.”

However, in the stage-play the fairy was reduced to a flickering light and a tinkle of bells.  The light “darts about” using language that is variously furious, acerbic, shrill and impudent- we are told.  But it all sounds the same to us; Tinkerbell is a presence that can hardly be seen and barely understood except through the mediation of Peter.

This image of a flickering light caught hold though, despite its insubstantial nature, and is noticeably strong in the evidence of contemporary witnesses.

Is this all Barrie’s fault and invention, though?  By and large, traditional sightings don’t have much to say about glowing lights- except for the will o’the wisp, who was nothing but a flitting light.  These fairy apparitions have only one purpose, though, to lure travellers out of their way into bogs and mires; they are not fully rounded characters like Tink and most faeries.  Nevertheless, despite the paucity of evidence, there is an interesting report from Dartmoor published in 1876 which describes the pixies.

“The pixies are never really seen, but in some cases white spots are seen moving about in the dark and then they are heard- although you can’t understand their words.” (Transactions of the Devonshire Association, vol.8, 1876, p.57)

Secondly, from Evans Wentz’ Fairy faith in Celtic countries, there comes a sighting on the Isle of Man dating from about the 1860s.  The witness, a member of the island’s legislature at the time of recording his experience, had been walking home at night with a friend when he saw across a small brook:

“a circle of supernatural light… The spot where the light appeared was a flat space surrounded on the sides away from the river by banks formed by low hills; and into this space and the circle of light, from the surrounding sides apparently, I saw come in twos and threes a great crowd of little beings smaller than Tom Thumb and his wife.  All of them, who appeared like soldiers, were dressed in red.  They moved back and forth amid the circle of light as they formed into order like troops drilling.” (Wentz p.133)

The witness’ companion declined to get any nearer and, after a while, struck a wall with his walking stick, thereby causing the fairies and their ‘aura’ to vanish instantaneously.

Lastly, Walter Gill recorded in his Second Manx Scrapbook of 1932 that fairies might be seen far off at night on the Isle of Man, as sparks or little flames dancing on hilltops.

These three are  intriguing, if rather isolated, reports. 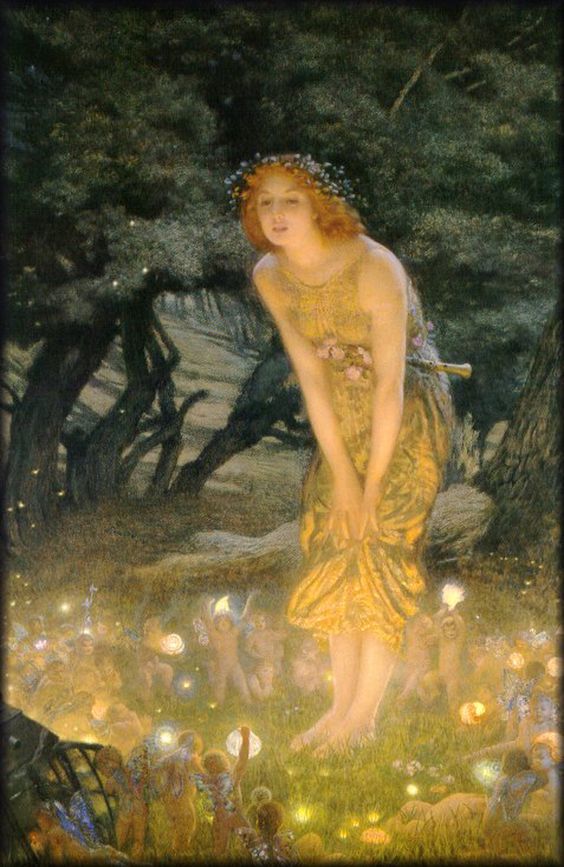 In the more recent witness reports of Marjorie Johnson’s Seeing fairies and, even more so, in the Fairy Census 2017, the luminosity of fairies is often mentioned, so it’s worth analysing the figures a little.

Movement is the most noticeable feature of the sightings in the modern period.  In the Census there’s total of 69 cases of luminous fays (14% of the total); Johnson meanwhile has 34 instances.  Whilst 15% of the Census lights were stationary, 73% were in motion.  Sometimes a fairy body will be seen with the light, or the fairy is said to have ‘an aura’ but they can too be simple points of light: 28% of the Census witnesses described the fairy as a ball of light.  We may very well suspect here the influence of J. M. Barrie‘s stage representation of Tinkerbell in the minds of those having the experience.  This seems to be confirmed by a woman from Michigan describing an experience during the 1990s.  She wrote that:

“They were like little lights. Like Tinker Bell while she’s flying. A little pixie light. Several of them.”

Another witness told Johnson about “a Tinker Bell light.”

There’s more to say though.  A variety of effects have been associated with the bright fairies.  Some give off flashes of light, others sparkle (“as though speckled with stardust”). Some  produce a noise (for example, a high pitched buzz or humming) and some also wax and wane in their brilliance:

“the whole area of trees seemed to glow as though there were a lot of lights in that area of the woods. The light seemed to pulsate, growing brighter and growing dimmer again. I watched closely and saw the light changing colour. There were several different colours, blue, red and orange and they all seemed to blend together.  ” (Census no.6, England, 2014)

A variety of colours are seen.  Blue, white and multi-coloured are most common, but a full spectrum of hues from pink and violet through green to silver and gold have been reported.

In Johnson’s reports 25% of the fairies had an aura.  For example, one was “a lovely little fairy dressed in silver and green and it floated before her, lighting the way.”  (p.37)  A woman and her child in Cornwall saw a patch of mist in the garden, which-

“gradually cleared to light like neon-lighting, but ball-shaped and then, fascinated, she watched what she called the ‘glitter of the fairies’, mauve, blue, green, orange, yellow, red and white lights brighter than any gems, going round in a little circle and then darting backwards and forwards.” (p.168)

Another witness on the Scottish island of Iona in 1954 saw a mass of light shaped into small clouds and another being with a ‘halo’ of spring green and sunset pink around the head (p.226)

As already seen in some of the quotations, 20% of the Census cases the fairy lights are associated with trees, bushes and other foliage.  Today, of course, we very much conceive of greenery as the natural abode of the fays but nonetheless it is an interesting association.

People may of course see lights for a variety of reasons.  Their eyes may be dazzled; there may be some physiological problem that has yet to be diagnosed.  Even so, many of the experiences on the Census don’t seem capable of explanation by such means and the witnesses themselves are frequently critical and cautious of ascribing supernatural origins.  For example, they will often consider other explanations, such as insects.  The comparison may be made to a firefly, but there will be something to make it clear that it is not an insect that has been seen- generally the size of the being.  One of Johnson’s correspondents described seeing in Spain in the mid-1950s “quantities of small lights- which were too big for glow worms- flitting about.” (p.313)

The experience of bright, flitting fairies is now so common that we may have to regard it as one of the features of the species.  Despite the paucity of older sources recounting similar effects, darting lights now seem to be a determining element for deciding what a witness has seen.  These sightings may be very puzzling, but they are persistent and consistent, so we may need to revise our preconceptions about the supernatural and how it appears to us.

2 thoughts on ““Ray of light”- Tinkerbell and luminous fairies”