There is some strange connection between the faes and bees which, rather like their associations with the cuckoo, are now no longer as clear to us as once may have been the case.

The Voice of the Beehive

There is certainly a similarity in terms of appearance and sound between honey bees and faeries.  For example, a man on Arran was out cutting bracken one day when the fairy host flew over him.  He reported that he saw “something like a swarm of bees,” into which he threw his reaping hook.  The iron tool caused the faes to drop his wife, whom they had abducted, leaving a ‘stock’ behind in her bed.

This comparison to a flock of small creatures is common in eye-witness reports.  A man at Benbecula in the Hebrides heard the sluagh go over- it sounded to him ‘like a flock of plovers.’  A man living near Harrogate once got up early to hoe his turnips.  When he reached his field, he was astonished to discover every row was being hoed by a host of tiny men in green.  As soon as he tried to climb over the stile into the field, they fled like flocks of partridges.  In another Yorkshire report from Ilkley, fairies surprised whilst bathing in the spa there made a noise “not unlike a disturbed nest of young partridges” when disturbed by the caretaker.

The noise of the fairies, as well as their appearance, might resemble that of a hive of bees.  John Aubrey told a tale of his former schoolmaster, Mr Hart, who in 1633 came across a “faiery dance” (a green circle on the grass) on the Wiltshire downs and saw there sprites who were “making all manner of odd noyses.”  They objected to his intrusion on their dancing and swarmed at him, “making a quick humming noyse all the time.”  A fairy host described on the Isle of Man sounded first like humming bees, then like a waterfall and lastly like a marching and murmuring crowd as they drew progressively nearer to the witness. (Sophia Morrison, Manx Fairy Tales, ‘Billy Beg, Tom Beg & the Fairies.) 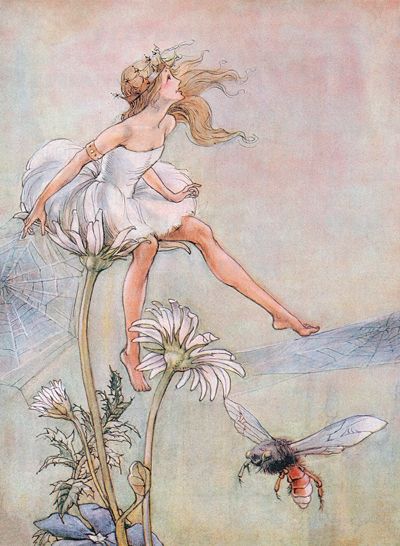 Florence Anderson, ‘Do you believe in fairies?’

Modern sightings have often compared fairies to insects (though admittedly butterflies, moths and dragonflies rather than bees) but ‘buzzing’ is a term used to describe their motion.  One woman in Florida saw a fairy riding a bee (for example Fairy Census no.s 5, 5A, 320, 400, 417, 475 & 251).  The weirdest sighting comes from Marjorie Johnson, Seeing Fairies:  a woman on holiday in mid-Cornwall during the 1930s described meeting a female cliff-dwelling pixie, who was about two feet in height and was covered in short dark brown hair with yellow rings on her body and arms, very much resembling a bumblebee (p.53).

Returning to the Manx faes, another traditional belief was that ‘bumbees’ are actually misbehaving fairies who have been turned into insects as a punishment by others in their community.  In Ireland, in the 1850s, a folklore collector was told that bees are fairies, who are in turn the souls of those deceased, a notion that connects us back to the longstanding ties between fairyland and the land of the dead.  The identity between fairies and bees is attested from Wales, too.  In British Goblins Wirt Sikes describes how those trying to destroy ancient megalithic monuments would face supernatural opposition, amongst which might be “swarms of bees, which are supposed to be fairies in disguise.”  (Notes & Queries, vol.10, 1854, p.500; Sikes p.383)

Lastly, mention ought to be made of the spirit called Browney, a Cornish fairy whom you’ll find listed by Katherine Briggs amongst others.  Simon Young (of the Fairy Investigation Society) has written an article, Against Taxonomy: The Fairy Families of Cornwall, which argues quite convincingly that this sprite- who was allegedly summoned to settle a swarm- was the product of confusion and misremembered stories, and never existed at all.

The fairy associations with moths is the subject of an earlier posting on this blog.  The fae ability to fly is also related to this, as is the existence (or not) of fairy wings. For more on the faeries’ interactions with nature, see my book Faeries and the Natural World (2021).

9 thoughts on “Fairies and bees”