The source of my title, but not very relevant, I know…

What do the fairies think about us?  The view that has emerged in recent decades is that they are concerned to help us, to heal the planet and to better ourselves, but as I’ve indicated in previous posts, the older tradition very frequently discloses a harder, more cynical character.

The attitude of the faes to humans that is exposed in the folk stories can be, at best, dispassionate and can be coolly exploitative in other accounts.  In fact, according to some observers, the fairies regard us with humour or even contempt. 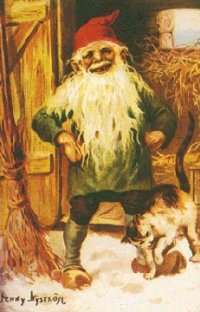 In the 1673 text, A Pleasant Treatise of Witches, the author describes the fays as “little Mimick Elves” who “busy themselves chiefly in imitating the operations of men.”  We shouldn’t mistake this for flattery though: these ‘imitators of men’ seem to laugh, he tells us, “mocking sometimes the workmen [in mines] but seldome or never hurting them.” (p.53)

This bleaker view of fae conduct was repeated in an article in Fraser’s Magazine in 1842 (vol.25, p.317).  In A Sketch of Scottish Diablerie in general the writer observed that most people feel that they imitate human feasts and pastimes in “fiendish mockery” and for some “hellish purpose.”

In this light, an isolated incident in Marjorie Johnson’s Seeing Fairies acquires more meaning and significance.  A Mrs J. Hanley recalled an incident that had occurred when she was a young woman of eighteen.  Walking in the mountains near Bettws-y-coed in North Wales, she had the sensation that she was being followed and turned around.  She saw:

“a little man about two feet high, who looked rather as if he had been put together out of sticks or the twisty roots of gorse.  He seemed too me to be swaggering along, mocking us, I think, as a small boy might so.”

She turned to her companion to point out the extraordinary sight, but the being vanished at that moment (of course).  Nevertheless, she retained the feeling that she and her friend were being watched by several unseen observers and were “the objects of derision.” (p.24)

This is not the only such experience recorded in Johnson’s book.  Other witnesses detected a derisive tone in voices or in the way that fairies laughed at them- although sometimes this amusement may have been merely teasing or even sympathetic. (Johnson pp.25, 58, 68 & 90)

From time to time, fairy contempt for humankind breeds overconfidence.  This can be seen in the ‘Rumpelstiltskin’ class of stories, in which a fairy being holds power over an individual so long as his name can’t be discovered. Contemptuous of the human’s ability to guess the name, the supernatural uses it to himself- and is, of course, overheard.

Why should the fairies have this attitude towards us?  Scottish fairy poet James Hogg may offer part of the explanation.  He was told by shepherd William Laidlaw that he had met with fairies in the Ettrick Forest. Their wild unearthly eyes had-

“turned every one upon him at the same moment and he had heard their mysterious whisperings, of which he knew no word, save now and then the repetition of his name, which was always done with a strain of pity.” (‘Odd characters’ in Shepherd’s Calendar, 1829).

Perhaps this explains the fairy attitude.  Humans are short-lived, they lack magical powers and they spend their time working hard to win the means to live. Compared to the carefree fairy lifestyle, it must seem a comically pitiable existence, hectic with unceasing toil and prematurely ended.  In this context, it’s highly instructive to reread the recollections of Welsh boy Elidyr, who visited faery in the twelfth century.  He recalled to Gerald of Wales that the fairy folk he met had only contempt for humans’ ambition, infidelity and inconstancy.  Later he tried to steal a golden ball from his supernatural hosts; they recovered it from him with expressions of scorn, contempt and derision.  The encounters described above all appear to be modern instances of the same responses.

See my new book, Faery, forthcoming from Llewellyn International in March 2020 and see too my previous posts on faery relations with humankind and the overall fairy temperament and attitudes.

7 thoughts on “Laughing gnome- the faery attitude to humans”