I have previously paid some attention to fairy healing, but I’ve recently gathered together a range of evidence on the types of cures and medicines that people have got from the fairies and it made sense to sort and arrange these to give a you a full idea of the sorts of methods and ingredients used.

There are a number of key elements or procedures regularly found in the cures, which are as follows.

As a primarily rural people, it is far from surprising that the fays tend to use commonly found plants to make their potions.  Frequently we’re only told that ‘herbs’ were used, made into drinks and salves, but sometimes we are given more detail than just reading that they were “divers green herbs” which doesn’t help much at all.  Suspected witch, Isobel Stirling, used rowan in her cures; Elspeth Reoch used yarrow to cure nosebleeds; Bessie Dunlop was given something like the root of a beet by her fairy adviser and was told to cook it and make it into a salve or dry it and powder it.  Katherine Cragie was tried on Orkney in 1643 for both curing and inflicting illnesses; she treated those stricken by the trows with an application of foxglove leaves (the plant was called ‘Trowis Glove’ on Orkney at this time; it is not a practice to be imitated given the toxicity of the plant).  Nonetheless, Jonnet Miller of Kirkcudbright, tried in May 1658, also treated a dumb man with foxglove leaves in water from a south running stream.  Isobel Haldane of Perth was tried in 1623 for making charms, a skill she claimed to have been taught by the fairies.  She attempted to drive out a ‘shargie bairn’ (a changeling) using a drink made from ‘sochsterrie’ leaves (possibly star-grass); the infant died (which may or may not have been a successful cure). Lastly, in 1716, Farquhar Ferguson of Arran was tried before a church court for practising charms: one of his medicinal drinks was made from agrimony.

A range of illnesses would be treated with herbs.  For such maladies as “ane evill blast of wind” or being “elf-grippit” (having a fairy attack or seizure) Bessie Dunlop had a variety of cures.  She would mix assorted herbs together to feed to sick cattle; illnesses in people might be cured by ointments or by powders (which were presumably ingested); during her examination in court she added that if the patient “sweated out” the treatment, they would not recover.  Just like Bessie, Jonet Morrisone from the isle of Bute healed a little girl who’d been ‘blasted with the faryes’ using herbs.  Rather like Bessie, too, she told the court at her trial in 1662 that treatment in time should guarantee recovery, but if she was consulted too late, the patient might still “shirpe” (shrivel or wither) away.

Alesoun Peirsoun treated the Bishop of St Andrews for trembling fever, palpitations, weakness in the joints and the flux with a herbal ointment which she rubbed into his cheeks, neck, breast, stomach and side.  Alesoun had spent seven years visiting the faery court in Elfame and had seen the ‘good neighbours’ making their salves in pans over fires, using herbs they had picked before sunrise.

Herbs seemed to do more than cure illness in livestock and people, though.  Janet Weir of Edinburgh told her trial in April 1670 that her fairy helper, a woman who would intercede on Janet’s behalf with the fairy queen, also gave her a piece of tree or herb root which allowed her to “doe what she should desyre.” 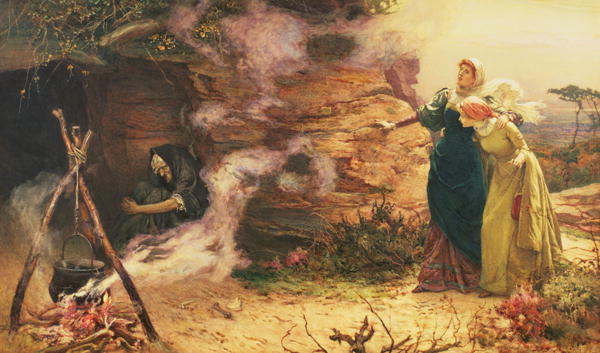 Edward Frederick Brewtnall, A visit to the witch

The herbal remedies just discussed as often hard to separate from those involving food stuffs, some everyday ingredients, others rather more expensive and harder to come by.  For instance, Alesoun Peirsoun also treated the Bishop with a medicinal broth made from ewe’s milk, wood-ruff and other herbs, claret and the liquor of boiled hen, which he had to drink over two successive days- a quart at a time.  Bessie Dunlop made a similar preparation.  She was approached for help by a young gentlewoman who suffered from ‘cold blood’ and fainting fits, for which she prescribed a potion made from ginger, cloves, aniseed and liquorice mixed in strong ale and taken with sugar in the mornings before eating.  Margaret Dicksone of Pencaitland used eggs and meal to drive out a changeling- perhaps more of a charm than a cure, just as was the case with the aforementioned Elspeth Reoch.  She acquired the second sight by means of boiling an egg on three successive Sundays and using the ‘sweat’ that formed on the egg to wash her hands and then rub on her eyes.

The vicar of Warlingham in Surrey in the early seventeenth century recorded a range of cures that had apparently been taught to him “by the fayries.”  Some of them involved the shedding and use of blood (quite common in magical remedies), others used food and herbs together.  For example:

I’ve discussed before how water can have magical properties. For example, from Shetland there come several accounts of trows using ‘kapps’ (wooden bowls) to pour water over patients during healing ceremonies.  The implement and the liquid were both important apparently (Saxby, Shetland traditional lore, p.151).

This is very often seen in the fairy-taught healing procedures.  Margaret Alexander from Livingstone used well water combined with charms to cure sick people.  Likewise, Isobel Haldane, who lived in Perthshire, took water from wells and burns and in it washed the shirts of her patients.   A woman called Jonet Boyman from Edinburgh would also diagnose sickness using a patient’s shirt, taking it to a well on Arthur’s Seat just outside the city.  Jonet had first acquired her healing skills by going to the well and raising a whirlwind, from which emerged a fairy man who taught her.

Earlier I mentioned Jonnet Miller, from Kirkcudbright, and it’s worth repeating here that one of her remedies (at least) required water taken from a stream that ran southwards.  Stein Maltman of Stirling told his 1628 trial that he made several different uses of water in his cures.  He boiled elf-shot in water from a south flowing stream and either had a patient drink it or bathe in it; in another case he had a man bathe himself in such a stream having first diagnosed his illness by reciting charms over one of the man’s shirts. Margaret Dicksone, mentioned just now, also treated a suspected changeling child by washing it- and its shirt- in a south-flowing stream.

Rituals and other items

Our last category involves a mixture of odd materials that were considered to have medicinal effect.  Catharine Caray from Orkney diagnosed and cured the sick using thread, charms and stones to cure physical and spiritual illnesses. For example, the thread might be tied on with an invocation of the holy trinity and the words “’bone to bone, synnew to synnew, and flesche to flesche, and bluid to bluid.”  Threads, often red in colour, were regularly used to protect cattle and children from fairy attacks.  Bessie Dunlop, for example, was given a green silk thread by her fairy helper, Thom Reid, with which she assisted women in childbirth.

Suspected witch Andro Man was tried at Aberdeen in 1598.  He used several methods to cure animals: he hit them with birds but he also employed salt and black wool.  A sick man was cured by passing him nine times through a length of yarn, and then transferring the illness from that to a cat.  He would invoke St John and use other holy words in Latin borrowed from Catholic liturgy; he stopped oxen from running away using ‘lax water’ (possibly water from a salmon stream or in which salmon had been cooked).  Lastly, he protected fields of corn by placing four stones at each corner.

Treatment by passing patients through hanks of yarn was also practised by Isobel Haldane, by Janet Trall from near Perth- who then cut up the yarn into nine parts and buried it in three different places- and by Thomas Geace of Fife, who burned the yarn afterwards.  I assume that this has some relation to the use of girdles in diagnosing sickness.

Stein Maltman, mentioned in the last section, had learned his healing skills from the “fairie folk,” whom he often saw, and they supplied him with a repertoire of cures.  He rubbed some patients with elf-shot; over others he waved a drawn sword, on the basis that the naked iron would scare the malignant fairies away; finally he advised some of those who consulted him to return to the spots where they felt they had picked up their infections, there to pray for healing.

6 thoughts on “Fairy cures and potions”