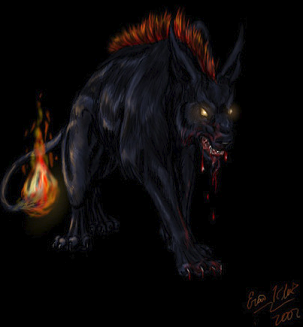 This posting is a further collection of material I have collected during my researches since I completed the manuscript of my forthcoming book, Beyond Faery: Exploring the World of Mermaids, Kelpies, Goblins & Other Faery Beasts.

The black dog is a faery beast that seems to be very typical of the southern half of Britain- that is England, Wales and Cornwall, plus the Channel Islands.  They have been reported since the Middle Ages.

These creatures can be supernatural beings that appear sometimes in hound form, sometimes as other animals (or objects), or they may only ever be seen as terrifying hounds.

For example, on the Cotswold Hills black dog apparitions are very common.  Some seem to be the ghosts of humans (often murdered), some are dogs, many are evil and a few are even helpful, such as that at Birdlip Hill which guides lost travellers.  Far more representative of the species is the black dog that was sighted periodically during the nineteenth century at Barton Lane, Headington, Oxford.  This large hound had glowing eyes the size of saucers, something that’s a common (and highly alarming) trait of the species.

Many of these black phantom dogs have no special name, but in East Anglia they are often called ‘shugs,’ reflective of their shaggy appearance, whilst in the North of England there are several types of the species recognised, which go by the names of padfoot, guytrash, barguest and skriker.  I will deal with these northern types in a forthcoming posting.

On the Channel Island of Guernsey there is the black dog called Tchi-co, or La bete de la Tour.  It haunts the streets of St Peter Port and has the unearthly cry and huge flaming eyes typical of its kind.  These are combined with another regular feature, the sound of chains being dragged along the ground.  La bete is the size of a bear or a large calf but is sometimes invisible, its presence being indicated by the unearthly clanking and howling.  Several other such phantom dogs are known on the island: Le Chien Bodu is a black dog that portends death; another, pulling its chains along, prowls the Forest Road and can cause death by the shock it inflicts on witnesses.

Unfortunately, people have found that you can’t chase these creatures off, like normal dogs.  A man tried to strike a white hound he saw at Horbury in Yorkshire in 1880; his stick went straight through it and he received such a shock that he returned home, took to his bed, and died (see Magical Folk 55).   A headless hound that haunts Ville au Roi on Guernsey is similar: although it can be felt brushing past night-time travellers, it has no substance if you try to strike it.

The Pembrokeshire Herald in March 1853 carried a fascinating report of an encounter between a Church of England clergyman and a spectral hound.  The account summarises most of the characteristics described so far- but adds something new and troubling.  To begin with the dog was invisible, and the minister heard only its panting and the padding of its paws behind him as he walked.  Then he felt it brush past him and it revealed itself; it was blue, the size of a young calf and had eyes like glowing coals.  As just discussed, his reaction was to try to strike it with his walking stick- which passed through the beast harmlessly.  Luckily for the vicar, a coach happened to pass just that moment, so he flagged it down and boarded.  Given his lucky escape, he took a moment to close his eyes and calm down- only to discover that the dog was under the seat opposite him and was then see prowling outside his home.  Luckily, probably, this ‘stalking’ trait is unique amongst these hounds.

Generally, terror is the main result of an encounter with one of the black dogs.  However, ‘Hairy Jack’ at Grayingham in Lincolnshire was one of those that attacked solitary passers-by and the black hound of Rodway Hill in the Quantocks in Somerset left a man paralysed for the remainder of his life after it brushed against him.

Generally, religious ritual seems to be the only way of dealing with these hounds.   The black dog of Wilcote Wood near Wychwood on the Cotswolds was laid in an elaborate manner.  A new born baby and two clappers (bird scarers) were acquired.  A priest prayed over the baby and then threw one of the clappers in one pond and the other in a second pond nearby.  As long as the two are kept apart, it is said, the dog will never reappear. In another version of this story, the clapper was taken from a bell and the two parts put in the two ponds.  If, for some reason, the two are ever reunited, the hound will rise again.

Jacob Allies, in his 1852 description of the folklore of Worcestershire, described a fairly typical black dog that haunted a deep and gloomy lane near Alfrick.  It might be seen as a dark hound lying by the road, which would cause horses to freeze on the spot, but it also appeared to manifest as a wagon drawn by four black horses, a dark rider or a large crow, all of which could be accompanied by the sound of a terrible, hollow hammering.  The barguest of Glassensikes, near Darlington, is seen as a black dog that howls at midnight before a calamity, but it also manifests as a headless man or woman, a white cat or a rabbit.  The ‘bargest’ of Northorpe in Lindsey, Lincolnshire, haunted the graveyard there, reinforcing the ‘hell’ hound aspect of this species.

The black dogs are often confused or mingled with the aerial hell-hounds, known as the whist hounds, gabriel ratchets or dandy dogs.  In Wales there are the packs of the cwn bendith y mamau (fairy dogs), which were still heard on the slopes of Preseli a century ago, and the solitary ci bal, which ranges across the whole southern part of the country.  If it pursues you, you can escape by crossing running water (a way of escaping many faeries).

Another name used for these Welsh hounds was cwn annwn, or hell hounds, which have been described in one report as small and either black with red spots- or red with black spots.  Those witnessed in Glamorgan are said to be blood red and dripping with gore; they howl in the air as if lamenting.  The related cwn wybir are reported to be heard at night in desolate spots (mountains and moorland) baying and yelling in the air.  They don’t seem to do any harm to mortals, as their prey is the spirits of the dead.

Similar creatures are also found in the South-West of Britain.  On Bodmin Moor in Cornwall, the dandy dogs are said to hunt the souls of the damned at night.  Further west, the ‘goblin hounds’ have been heard hunting hares across the downs between Truro and Redruth.  In Devon the wish hounds are silent black dogs seen in a pack that seem to threaten the living. Children can be protected from them by putting bread under their pillows.

There are many other fae beasts, albeit ones that seem consistently to keep to one form.  There is, for example, a white hare that is seen on the quays of the Cornish fishing village of Polperro.  It is harmless, but it predicts a coming storm.  White hares and rabbits are often seen in Lincolnshire and, significantly perhaps, it is said in Yorkshire and Worcestershire that if one crosses your path at night it is a sign of impending death.  For example, in 1891 one writer reported the case of a stonemason who had seen a white rabbit whilst out at night catching sparrows.  He was overcome with such terror that he went home, took to his bed and died (see Magical Folk 54-55).

At Finstock in the Cotswolds, the awful apparition is a nanny goat that drags a chain along.  At North Leigh in Oxfordshire, a headless calf is seen.  The white calf at Lackey Causey (causeway) in Lincolnshire is one of a number found in that county: it hid, or lived, in a drain under a bridge, from which it would emerge to try to lure travellers into the brook.

In all these cases, the fae beast is an animal that would, in normal circumstances, be regarded as harmless- even endearing- by a person who met it.  However, in their faery form they have features which both betray their supernatural origin and can be distressing to the witness.

From the Isle of Man there is a report of a very alarming fairy cat.  One night, a man was about to shut and lock his cottage door when he saw a white cat sitting just outside.  He went to shoo it away, but it would not move.  He then, unwisely, tried to kick it, in response to which it stood up and then swelled up to an enormous size, almost blocking out the sky.  Fortunately, it then walked away, leaving the cottager terrified…

This is by no means an isolated account.  Margaret Alexander was accused of witchcraft at Livingston in Scotland in March 1647.  She confessed that she had been “mightily troubled in her house at night with a rumbling and many kats had resorted there.”  Confirming the faery nature of these visitors, she recalled how, forty years earlier, a number of “kats” as big as sheep had appeared before her in one of the streets of the town.  They had then turned into men and women, some of whom were dead and some alive- implying strongly that they were faery beings.

A great deal less sinister was a kitten encountered by a gypsy family in a snowstorm on the Cotswolds.  It advised them to follow the sound of church bells and, by that means, they got to shelter out of the blizzard.  They were sure this benign creature was of supernatural origin (as it had to be- it spoke to them…)

It’s worthwhile just reminding ourselves that the fae are known to keep their own dogs (for guarding and hunting), cattle and horses (for riding and hunting).  These beasts have their distinctive characteristics, but they are quite distinct from the creatures described here.  The various monstrous I have described here animals operate autonomously, whereas the fairies’ hounds and herds are definitely under their control.

I have discussed fairy cattle previously; here, I’ll add a little more about the fairies’ hounds.  There is often something to identify them as being out of the ordinary: for instance, the cu sith or fairy dog of the Scottish Highlands is the size of a two year cow and is green- or even multi-coloured, with yellow feet, black sides and red ears.  The fae have been seen riding with their dogs, or processing on foot with them going two by two.  This suggests that they’re well-trained and obedient animals, whatever their appearance.  This isn’t always borne out by experience, however.

In one Welsh story a man walking in his garden was attacked by a fairy dog that looked like a greyhound.  It ran between his legs and carried him off at great speed, charging through bushes and hedges as it went.  Eventually, the unwilling rider managed to get off and stumbled home- only to discover that he’d been gone for two weeks.  In another example, a farmer from Sutherland in the north of Scotland was resting in his field after completing his ploughing when he heard the horns of a fairy hunting party nearby.  Suddenly, two large and threatening dogs advanced upon him, sniffing his knees.  Luckily, a disembodied voice called them off.

I’ve provided links to some of my previous postings on faery beasts and several chapters of Beyond Faery are devoted to the hounds and other animals.