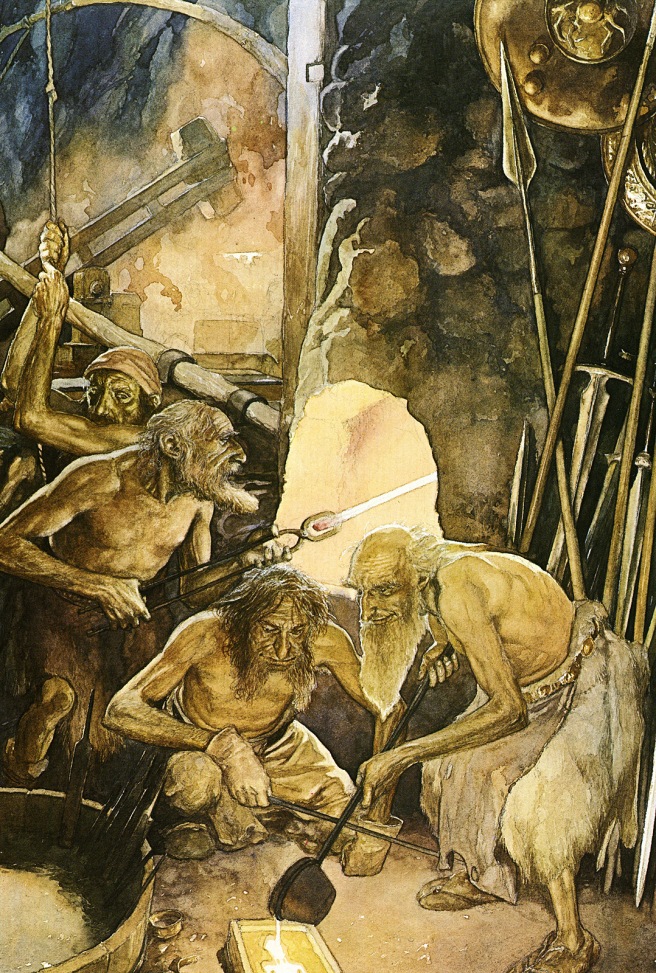 There’s lots of evidence for fairies being just as active as humans in extracting the earth’s resources and in manufacturing.  This may jar somewhat with the notion of winged flower fairies, but that convention forgets the fact that gnomes, as first imagined by Paracelsus, are very intimately connected to the mineral riches of the earth.  Fairies can seem just as interested as humans in money and treasure, so it’s worth considering where these riches might come from.

There are two principal industrial activities in which fairies are involved.  These are metal working and mining.  The fays mine for both coal and ores and they have been associated with the tin mines of the South West of England, the lead mines of the Long Mynd in Shropshire and with the copper mines of Cumberland and North Yorkshire.

There are two principal types of mine fairy- the knockers of the South West of England (also called ‘nuggies,’ ‘bockles,’ ‘gathons’ or ‘buccas’) are very well known.  In the coal and metal ore mines of Wales, we find the coblynau (i.e. goblins).  Other named mine spirits are the Blue-Cap of the Northumberland coalmines, a very strong being who moved the wheeled coal tubs on the underground railways, and the Cutty Soams of County Durham, who were mine bogles, known for their vengeful mischief- which included such pranks as cutting the traces (or ‘soams’) on the underground coal wagons.

Despite the differing regional names, it seems safe to treat most of these beings as one underground species.  The knockers and coblynau are very hard working sprites who are frequently heard but very seldom seen; the sounds of their picks, their wheelbarrows and the falls of stone they cause is heard deep in mines.  Occasionally they may be spotted working or lounging near the entrances to mines, and those who have seen them describe beings the size of a one or two-year-old child (about eighteen inches high), with large heads and ugly old men’s faces; they are dressed just like human miners.

Early in the last century, a girl called Carol George was on the beach at Porthtowan, on the north coast of Cornwall, when she saw in the mine adit that opened onto the beach a group of small people, only six inches high and dressed in white.  They disappeared almost as soon as they were spotted, but sound more like pixies than knockers (Marjorie Johnson, Seeing fairies, p.93)

Blue Cap apparently has no physical form, but his presence is indicated by a light blue flame which settles on the wagons he moves.  The other exception is the mine pixy ‘gathon’ (if Mrs Bray is to be believed, at any rate).  She describes him as naked and fat, with large ears and a long bushy tail (Peeps at Pixies, p.10).

The mine sprites have diminutive tools and equipment matching that of the human miners and labour tirelessly- digging, transporting and winding their coal and ore to the surface.  In the masque The fairies’ farewell, presented at Coleorton on Candlemas Day 1618, we hear a further description of the fairies’ labours:

“blacke faeries … ye dancing spiritts of the Pittes: … helpe them hole & drive sharp theire Picks & their moindrils, keepe away the dampe & keepe in theire Candles, draine the Sough & hold them out of ye hollows…”

Wirt Sykes, in British Goblins (p.24), claimed that all this frenetic subterranean labour  was just for show but accomplished nothing at all. The writer of A pleasant treatise of witches (1673) explained that this was because these mine elves “busy themselves chiefly in imitating the operations men … these seem to laugh, to be cloathed like workmen, to dig the earth, and to do many things they do not, mocking sometimes the workmen but seldome or never hurting them.”

These views might be correct- or it might instead be the case that human observers never saw any evidence of tangible results in this world.  Blue-Cap is the exception here, as he assisted the human miners and, perfectly reasonably, expected to be paid for his work at the same rate as every other ‘putter’ who moved the coal around the tramways.  Rather like fairies borrowing flour from householders, he insisted upon being given the exact agreed sum and would refuse underpaid wages or leave behind any surplus.  Evidently, Blue Caps were not brownies and neither toiled for free nor accepted very modest payment in kind.

Though often heard at night (in the North Yorkshire lead mines this earned them the name of the ‘Ghostly Shift’), these spirits never worked in the mines on Saturdays or on Christian holidays and, in respect for this, the miners too would avoid working on the same days.  The sprites also objected to whistling and to use of the sign of the cross, which were therefore proscribed.

The knockers will guide favoured miners to good seams or lodes by various means.  Where no excavation has yet been started they may indicate promising places to dig.  The sprites may dance in rings to indicate spots where men will strike rich ore.  Digging wherever a will o’ the wisp is seen is also reputed to lead you to a profitable lode.  The Reverend Edmund Jones of Gwent gives a very interesting account of a version of this habit.  One morning a William Evans of Hafod-y-dafel in the parish was crossing the Beacon Mountain when he saw an opencast coal mine where none existed.  The fairies were cutting coal, filling sacks and loading horses.  This vision is unexplained and, on the face of it, is merely a kind of fairy pantomime, serving no discernible purpose.  However, another report from Wales suggests a different interpretation.  Lewis Morris, a correspondent of the Gentleman’s Magazine in 1754, described how, before Esgair y Mwyn lead mine was discovered near Pontrhydfendigaid in Cardiganshire, the local fairies had been observed (and heard) by many people to be hard at work, both day and night.  When the mine was established in 1751, though, they disappeared.  The same was also the case at Llwyn Llwyd lead mine near Ysbyty Ystwyth, not far from Esgair y Mwyn.  These two cases suggest that the Brecon Beacons vision may well have been an indication of a rich coal seam just beneath the surface (a prediction similar to the incident of the fairy railway sighted on the Isle of Man that I mentioned in a recent post).

Once a new mine has been started, through their tapping underground the fairies point the way to mineral riches.  They will also warn of impending disaster- often by making three distinct knocks against the rock.  Generally, then, their presence is welcomed by miners- their noises are not found alarming and it’s said to be good luck to see the pixies dancing in the adit of a mine.

The sounds made by knockers can be prolonged and are not easily explained by other means.  For example, at Llwyn Llwyd voices, blasting, clearing spoil, levelling roadways, boring, pick-axeing and (most notably) pumping were all heard- when there were no pumps working within a mile of the shafts and when, in any case, pumps were very quiet when in operation.  Although they may sometimes be heard just once a month or once a year, in 1799 in some mines on Anglesey the knockers were heard repeatedly over a period of weeks.

As with all supernatural helpers, the knockers are averse to humans being too inquisitive.  Although the sounds of their work indicate how and where to dig, if miners stop their work to listen to the knockers, they will also cease their labours.  If they’re overlooked, they may pelt stones at the spies- or simply vanish.  The sounds of their excavations may point to rich veins of ore- or they may just be mischievous and meant to mislead.

As with many fairy types, those who offend them or try to take advantage of them will be punished and those miners who betray the source of their good fortune will lose the knockers’ favour.  At the same time, they claimed a share of human property.  This might just be a small portion of the miners’ food or of their candle tallow, but there are also accounts of bargains struck whereby the knockers were promised some of the profits of a rich vein in return for guidance locating it.  It hardly needs to be said that reneging on such deals would lead to ruin and even death, whilst boasting of fairy aid in finding rich seams of ore will guarantee that the good fortune is lost.  Mrs Bray’s mine pixy, Gathon, is depicted as a typical prank-playing sprite, but he also helps the oppressed and the poor, a not uncommon fairy trait.

The fairies may also be found in coal pits; from Scotland we have a report that from time to time they would leave their tiny tools behind as physical evidence of their labours.  We have one account from Derbyshire in the nineteenth century of the colliers of Curbar leaving a share of the coal they dug for the fairies to ensure good luck.

In some way, then, whether they were mining themselves or simply oversaw the shafts, these local fairies had a close interest in the industry.

Despite Sykes’ doubts about the productiveness of fairy labours, it seems very reasonable to suppose that ore and coal were extracted and that these formed the raw materials of other enterprises in fairyland.

In The Secret Commonwealth the Reverend Robert Kirk reports that the fairies “strike Hammers, and do such lyke Services within the little Hillocks they most haunt” (chapter 1).  The trows of Shetland are particularly renowned for their skills working brass, iron and other metals and they have been known to pass on these skills to fortunate human children who have been taken to live with them ‘under the hill.’  As I’ve noted before, it’s a curious contradiction that we can have reports of these metalworking abilities at the same time as being repeatedly assured that fairies loath and avoid items made of iron.

The only way of reconciling these two accounts is to assume that man-made iron is anathema to them but that their own products, imbued in some way with Faery properties, are harmless.  Certainly we hear of fairies having cutlery for eating and drinking vessels of precious metals- and of course brownies will undertake all sorts of farm tasks for humans- such as reaping corn and hay- that unavoidably involve the use of iron and steel tools.

As I’ve argued before, fairy society is a good deal more complex and more industrious than we might initially assume.  Whether they’re farming, mining or at market, trading the fruits of those labours, the fays can work just as hard as humans and be just as interested in commerce.

For more detail on this subject, see my book How Things Work in Faery (2021).

10 thoughts on ““The swart fairy of the mine”- industrial elves”