I discovered this artist through Sean Conroy’s former blog and had reposted it here.  His posts are no longer on WordPress but I found I inherited his images from him when I reblogged the post, so I have reused them with my own text…

Georges Picard (1857-1946) was a French painter and illustrator who produced a number fairy studies.  The pictures are distinctive, in part because of Picard’s unique ‘soft-focus’ technique (very much in contrast to the sharp and icy nymphs painted by his close contemporary Bouguereau) and in part because of his cavalier intermixing of fairies, sprites and nymphs, of adult women and small children gambolling together in sunny glades.

Picard’s fairy scenes include A Nymph and Forest Fairies and Nymphs and Cherubim Amongst the Vines at Obernai. His main figures never, honestly, look especially fae: rather, they are adult female nudes painted in the academic style, who are discovered, lightly draped with a thin veil, cavorting in woodland clearings.  They look like what they were: Parisian models with fashionable hair styles and jewellery.  They are in the company of sprites or fairies in the form of small naked children.  This mix of sizes is a trait inherited from many of the British fairy painters who preceded him, such as Noel Paton, as doesn’t tell us much (I don’t believe) about Picard’s fairy philosophy.

Particularly noticeable is Picard’s cheerful jumbling of genres, so that biblical angels appear alongside classical divinities, Graeco-Roman nymphs and dryads disport themselves with native French fées.

Picard also dealt with a fairy theme when he illustrated Alphonse Daudet’s short story  Le Conte de Noel, part of the La Fete des Toits (1896). This features a conversation between sparrows, chimneys, the snow and others.  We are then introduced to Les Kobolds.   For English speakers, the kobolds may best be known from German tradition as mine sprites, related to the Cornish knockers, but they are also household spirits, akin to a British Brownie, that live by the hearth or wood shed and undertake household chores at night.  They are small, male and bearded.  Daudet introduces them to us as follows:

“the familiar spirits of each house, who guide Christmas to all the chimneys where little stockings are waiting. “ 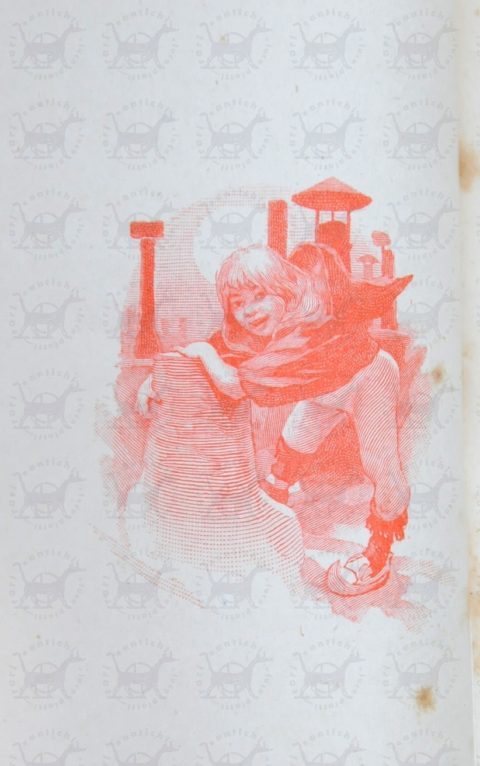 Christmas wants, this year, to concentrate on treating the poorest children, but the kobolds object that-

“With your new system, the poor children will be happy and the rich ones will cry.  But, a child who’s crying is neither rich nor poor- it’s simply a weeping child and there’s nothing so sad.”

Picard illustrated this story with two drawings which, despite the text, portrayed the kobolds as semi-naked girls.  One wears only her boots, the other a top with a pointed hood, stockings and shoes.  This latter sprite leans against a chimney pot, pushing out her bottom and regarding us impishly.  Picard had drawn very similar pictures of a little blonde girl playing in a pond, catching frogs, a figure he obviously preferred to the masculine (and possibly ugly) spirits that Daudet had imagined.

The artist drew what pleased him, but in his interpretation of Daudet’s text, as well as in his wider vision of Faery, he was rather misleading.  Nonetheless, his pictures, if we examine them attentively, can lead us to new insights into faery-kind.  For example, Daudet’s story is a clue that the kobold is an ancestor of  Santa’s toy-making elves, with whom we are today so familiar. 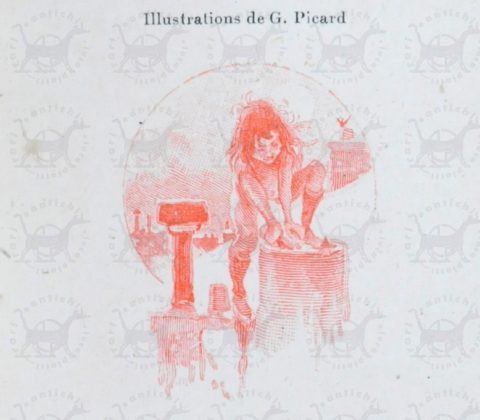 For more on the classical nymph, see my newest book Nymphology.  There will be more on knockers in my forthcoming book on the ‘Economy of Faery.’  For more on the art of Faery, see my book Fairy Art of the Twentieth Century