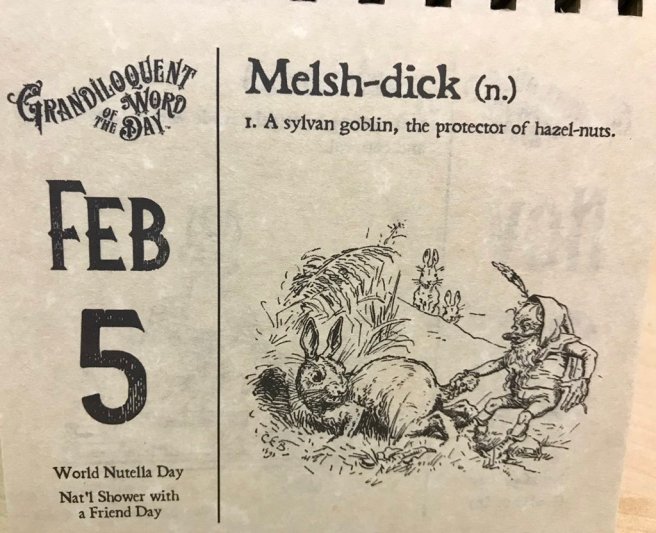 Although I often stress the independent and contrary nature of faery kind, there is a class of spirits whose almost sole purpose seems to be to protect human food resources and to prevent children getting into mischief.   Fairy expert Katharine Briggs often called these ‘nursery sprites‘ but this name suggests that they are only found inside houses- as indeed, some are, lurking in dark corners and empty rooms and scaring infants into going to bed and staying quiet, but some of these are found outside too (the pretty self-explanatory ‘Rawhead and Bloodybones’ being one such) and others only exist outside the nursery and the home- hence my preference for ‘cautionary sprites.’

Many of these spirits live in and around orchards and fruit patches, amongst them being Owd Goggie, Lazy Laurence, the Coltpexy and the Gooseberry Wife of the south of England.  There is a particular concentration of these beings in the North West of England, however, which will be my focus in this posting.  Incredibly large numbers of very local boggarts are recorded in Cheshire, Lancashire and Westmorland, and spill over the Pennine Hills into West Yorkshire and Derbyshire.

Guarding soft fruit and apples is more a southern activity, but further north nut groves are protected from the depredations of children, who are liable to steal the nuts and break the branches, by a range of sprites.  We know of Churnmilk Peg, Melch Dick and Nut Nan, who guarded the hazels from theft with threats of burning naughty children with heated pokers.  Peg was an old and very ugly hag, who sat in the groves around Malham in North Yorkshire, smoking  a pipe.  Her name derives from the hazels in their green state, when they’re called churn-milk. All she says is  “Smoke! smoke a wooden pipe!/ Getting nuts before they’re ripe!” and if this doesn’t work, she’ll abduct the disobedient youths.  Melsh Dick apparently derives his name from the same unripe, ‘mushy’ or ‘mulchy’ nuts; he too will make off with disobedient children.   These figures are often assisted in their work by Clap-Cans, a being with no form or substance whose sole purpose is to scare away youngsters by beating on tins with sticks.

It is fascinating to see how the faery world has been recruited to safeguard humans’ assets.  Normally, knowing their character, we might expect these supernaturals to be more likely to steal nuts than to defend them and we would certainly not anticipate any willingness to assist humans based upon their usual self-interested attitudes.  Here, we must accept that we have encountered a more altruistic spirit.

The capacity in the North West to accept that some faeries will subdue their will entirely to that of the human community, and act wholly in its interests, has had a very curious impact upon the perceived character of the river spirit Jenny Greenteeth and her close relatives- Peg Powler in the Tees, Mary Hosies in the Avon in Lanarkshire, Jenny the Whinney on the Isle of Man, Grindylow Peg, Nelly Longarms, the Nok and many others (including the enigmatic Brook Calf and Star Nell).  Traditionally, these rather nasty beings have had one purpose: to lurk in bodies of water and to try to snatch and kill the unwary- most commonly children.  Victims will be drowned- but they may also be eaten: Grindylow Peg, for example, has iron teeth for this purpose.  They may also be tortured horribly first.

For generations, children have been warned to stay away from stagnant ponds and pools, water-filled pits, mill dams, wells, springs and streams, because these are just the places where Jenny and her sisters wait, hidden perhaps under green weeds (and wearing their green caps), overhanging trees or projecting banks.  They need only the slightest opportunity to dart forth, seize the unsuspecting infant and drag them beneath the surface.  The floating vegetation closes again and no-one knows of or even suspects the tragedy that has taken place.  In this respect, Jenny is very clearly another cautionary spirit.   She has, however, experienced ‘mission creep’ in some very surprising ways.

As time has passed, Jenny seems to have infested new bodies of water: since the Industrial Revolution, she has also moved into canals, drainage ditches, culverts and tunnels- in other words, the inland waterways of the industrialised north-west .  This, of course, makes perfect sense, for these man-made watercourses are just as perilous for the young as natural features.  This change has brought her much more into built up areas, so that Jenny is now known in central Manchester as much as in the countryside.  It seems, as well, that once she got used to the town, she expanded her operations further: Jenny has been said to lurk too in old buildings and cemeteries.  We might be startled by this abandonment of her watery haunts, but then, in Cheshire she had long been known to lurk in trees in the absence of so many bodies of open water.  Jenny has even accommodated herself to human dwellings, in her search for prey: she has been spotted lying in wait in outside toilets, at the top of unlit stairs, in darkened corners and, in Yorkshire, in that quintessential piece of architecture, the ‘coyl-oyl’ (or coal shed).

Not only has Jenny expanded the sites of her operations, she has widened her franchise to incorporate a much wider range of juvenile wrongs.  Parents more recently have threatened Jenny’s intervention for far more than getting too near to the edge of a pond.  She has started to encroach on the preserve of the nursery sprites, and has been said to punish bad behaviour- a refusal to go to bed, neglect of hair brushing and (most appositely) want of teeth brushing.  It seems pretty obvious that some profound confusion has developed here over the exact of nature of Jenny’s green teeth.  Her origin in slime covered pools has been forgotten, and it looks as though parents now scare their offspring by suggesting that they’ll end up with green fangs like Jen’s if they don’t pay attention to decent oral hygiene.

In her more recent manifestations there is increasingly little to distinguish Jenny from the host of other ‘nursery sprites,’ beings that include Tom Dockin, Tom Poker and Bannister Doll and then blur into a wider array of alarming boggarts and bogles, such as Bibler Dick, Jonny Cobler, Shagcalf and White Horse, Old Lobb or Lob-Thirst, various phantom dogs and (one of my favourites) the apparition called the Baum Rappit, a scary ghostly rabbit seen near the church in Rochdale.  All of these bogies and hobgoblins have a primary function of giving us a shock- and very little more.  To return to our starting point, however, Jinny Green-teeth is said to guard orchards around Saddleworth on the Lancashire slopes of the Pennines.

Jenny, meanwhile, has also encroached on the domain of the fresh water mermaids, the ‘meremaids‘ as I’ve termed them before.  The fact of this overlap is unremarkable, given the almost identical habitats of each, yet the meremaids have always tended to have a wider scope of operations- at the very least, not being limited to terrifying children.

Several characteristics now applied to Jenny Greenteeth appear to have been transferred from the meremaids.  These include appearing only at night, most especially at full moon, guarding buried treasure and (a motif taken from the spirits of larger rivers) claiming an annual sacrifice or tribute of one or more drowned victims.

Earlier, I mentioned how Churnmilk Peg is said to be a terribly ugly hag.  Crossover or confusion between female spirits, hags and witches is not at all uncommon and I’ll conclude by noting that in one account, from Preston, Jenny Greenteeth is even said to be seen riding a broomstick.

The multitude of local bogies and sprites, for whom we only have scanty records now, along with their often overlapping activities, makes for fascinating study.  I look at the orchard sprites again in my recently published Faery and give extended consideration to the many boggarts and bogies in the forthcoming companion, Beyond Faery.