“They thought me, once, a magic tree

And at the door they planted me

To keep the house from harm.”

In a recent post I described the best days of the week to see fairies (or to avoid them).  There are also certain times of the year when they are more likely to be abroad in the mortal world, and when encounters are more likely- whether for good or ill.  (I should confess at the start that I’ve broken my rule and included material from Ireland here, because it is so consistent with that of the British Isles.)

The bulk of the evidence on festivals and seasons comes from Scotland and Ireland.  There is a little from Man, a couple of odd instances from England and Cornwall and from Wales all we really know is that there were three ‘spirit nights’, the Teir nos ysprydnos, when it was believed that supernatural beings of all descriptions were abroad (these were May Day, Midsummer Eve and Halloween). Despite any deficiencies, the accounts are nonetheless consistent.  Two festivals stand out across Britain and Ireland- these are May Day and Halloween.  On these occasions the fairies would be out and about in the world, partly for pleasure, sometimes because they moved home at these important times of the year.

On May Day fires were lit to scare away the fairies.  This was done in Ireland, Scotland and on Man, where it was expressly the gorse that was burned.  Both in Ireland and Man it was believed to be unlucky to give fire away to a neighbour at this time- perhaps because the protection from fairies was being dissipated.  On Man, too, rowan, primroses and green boughs were gathered and laid before the doors of houses, stables and cattle sheds to exclude the fairies.  The reason for these precautions seems to have been that this festival was the time when the fairies re-emerged after winter and held their first dances of the year.  As they were freshly abroad in the world, again, they were deemed particularly dangerous.  It was said to be unwise to draw water from a well for a drink after sunset.  In Ireland, it was believed too that the sidhe would try to steal butter at this time of year; in Scotland, they stole milk from the cows.  Also in Ireland it was considered that cutting blackthorn at this season would attract ill-fortune.  In the worst cases, a sudden death would be regarded as an indicator of an abduction.

The next major seasonal festival of the year was Midsummer, but this has fewer fairy associations.  In Ireland Beltaine fires were lit and once again these acted as barriers or discouragements to the sidhe folk.

It was at Halloween (Samhain) that supernatural forces again became particularity dangerous.  On this night the fairy folk were abroad once more, their last major excursion of the year, and mortals had to take precautions.  In Ireland it was thought that the sidhe moved home on this night, whilst in Scotland the fairy court enjoyed its last processional ride (or rade).  In the Outer Hebrides the season was said to be even more perilous as it was then that the fairy hosts fought amongst themselves, whilst in England this was the time of the year when the Wild Hunt rode through the nighttime skies of the South West.  A person out on Halloween was in grave danger of being swept up with the fairy throng. The only way that the rade could be seen by a mortal without peril was to have rowan hung at their door (hence my use of the verse and illustration by Cicely Mary Barker at the head of this post).  In Ireland offerings of food were left out near raths and other fairy sites in order to deflect their enmity.  Conversely, it was said that this was the best time of year to rescue those abducted, as the doors of the fairy hills would be open.

Even if you did not encounter the fairies, the countryside could be tainted.  For this reason, in Cornwall and in Ireland the advice was not to eat brambles after the end of October.  As in May, cutting blackthorn was discouraged too in November.  As at the start of the growing year, so at the end, torches were lit in the Highlands to keep the sidhe folk away.

Other dates with fairy links are Whitsuntide, when holy water was sprinkled inside Irish homes to ward off the sidhe and the season of Yule on Shetland, during which it was believed that the trows (trolls) would wander the island and enter human homes.  In fact, the Highland community served by the Reverend Robert Kirk during the late seventeenth century regarded all the quarter days (Candlemas, May Day, Lammas and Halloween) as risky times when there was fairy danger. 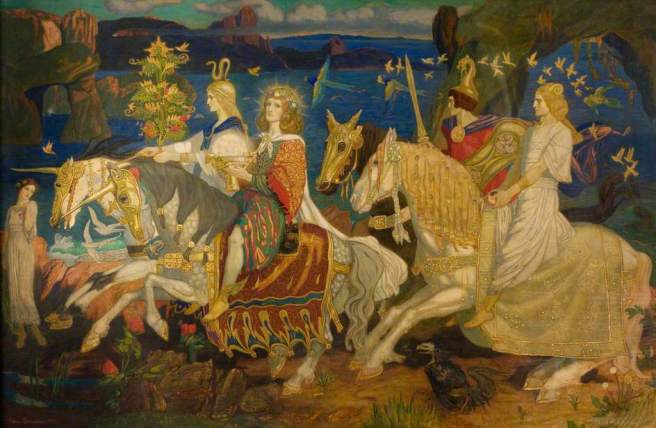 John Duncan, The riders of the sidhe.

Whereas the evidence on days and times of day was rather less conclusive, it is possible with some certainty to point to festivals and seasons of the year, liminal turning points in the calendar, during which the portals to the supernatural open, or at least become more porous, allowing far greater access from one side to the other. 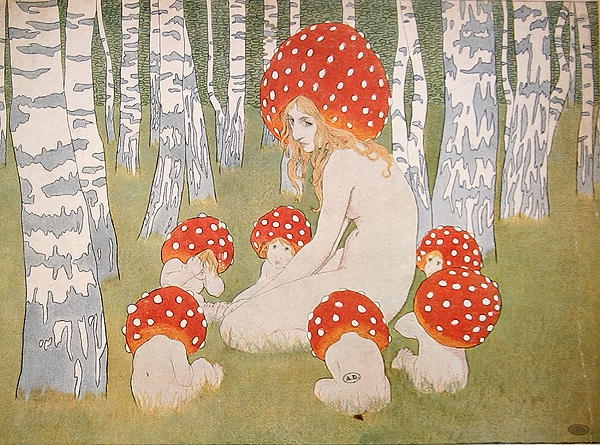 ‘Mother mushroom and her children’ by Edward Okun.

A range of plants have fairy associations, both good and bad.  It is convenient to divide them into three broad types for our discussion.

We commonly conceive of elves and fairies living in woodland, whilst certain specific tree species have strong links to fairies.  Thorn trees are magical throughout Britain and Ireland.  For instance, Northumbrian fairies are said particularly to prefer dancing around thorns.  From across the border comes a Scottish story of a man ploughing a field who made a special effort to protect an old hawthorn, known to be a fairy meeting place- by leaving an unploughed circle of turf around it- was rewarded with a fairy banquet and a life time’s luck and wisdom in consequence.  I have mentioned before the Old Lady of the Elder Tree as well as the special status of oaks as places for dancing or even as homes.  In The discovery of witchcraft of 1584 Reginald Scot listed the many different types of fairies with which mothers would scare their children (Book VII, chapter XV).  He included “the man in the oke,” a supernatural whose characteristics and habits are now almost entirely lost to us.

Rowan trees, in contrast, repel fairies.  Rowan set over your door will allow you to watch the fairies riding past without being drawn into their procession and a rowan cross worn about your person will prevent the fairies seizing you.  Both gorse and holly acted as protective barriers to fairies around a home, although it has to be confessed that they keep out humans just as well!

Today we tend to think immediately of flower fairies, but there is a much older and richer lore of flowers associated with fairies.  Fairy blooms include yellow flowers such as cowslips, broom, primroses and ragwort; the stems of the latter are used like witches’ broomsticks.  Blue bells are protected by fairies, and lone children picking them in woods risk being abducted. Fox gloves are known in Wales as menyg ellyllon, elves’ gloves.  The fairies also favour red campion, forget-me-not, scabious, wild thyme and, more unusually, tulips.

A strange tale from Devon describes how pixies near Tavistock loved to spend their nights in an old woman’s tulip bed and the flowers thrived from their beneficial presence.  When she died her flower bed was converted by the next residents in the cottage to growing parsley and the pixies blighted it.  An unknown plant was used by Dartmoor fairies to heal a servant maid they had previously lamed for refusing to put out water for them at night.  In a similar dual role, it is said that foxglove juice can expel a changeling and cure a child who is suffering from ‘the feyry’- that is, one who has been elf-struck.

The primary protective plant against fairies is St John’s Wort, although verbena is also effective.  I have discussed two other very important fairy plants separately: fern seed can confer invisibility whilst four-leaf clovers can dispel glamour.

The link between fairies and the fairy ring where they are alleged to dance is very well established, but the associations go deeper.  Fairy butter (y menyn tylwyth teg) is a fungus found deep underground in limestone crevices and elf food (bwyd ellyllon) is a poisonous toadstool.  In Northumberland, fairy butter is a soft orange fungus found around the roots of old trees.

The linking of fungi with goblins and elves is well known and of longstanding. Perhaps it partly derives from the dual nature of the mushrooms- they may be edible or poisonous. They are, of course, linked to fairy rings and indicate where the elves have been dancing. One of these is the ‘Fairy Cake Hebeloma’, which is poisonous; another is the highly edible Fairy Ring Champignon.  The sudden appearance of toadstools may seem magical and mysterious.  Their red colouring (for the traditionally red and white spotted fly agaric toadstool) may link them to red fairy clothes whilst their diminutive size may also explain the connection. Robert Herrick in his poem Oberon’s feast imagines “A little mushroom table spread” for the tiny fairy diners and in The fairies’ fegaries “Upon the mushroome’s head/ Our table cloth we spread.”

Puff balls have been called ‘Puck’s fist’ and, in his Fairy mythology, Keightley suggests that ‘Elf’s fist’ was an old Anglo-Saxon name for the mushrooms found in rings.  Wirt Sikes in British goblins relates a Breconshire belief that gifts of fairy bread by the Tylwyth Teg, if not eaten immediately in darkness, will prove to be toadstools in the daylight.

In other postings I examine the magical properties of fern seed, I look closely at fairy rings, I discuss the use of clover in the famous green fairy ointment and I consider the ‘flower fairy‘ cult.