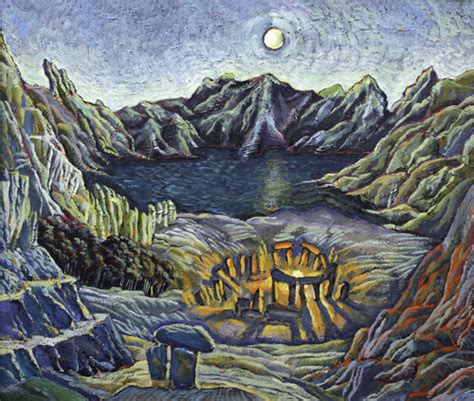 In a post last summer I discussed the Welsh tendency to portray fairyland as an island, especially an offshore island that appeared and disappeared unpredictably.  In this post I’m returning to the subject of the Celtic ideas of Faery,  but with a wider perspective.

We have to start with some background.  In Welsh mythology Annwn (Old Welsh Annwfyn) is the commonest term used for the Otherworld, the supernatural dimension.  The word occurs most notably in the title of a poem found in the ‘Book of Taliesin’ and dated roughly to the late 800s- early 1100s- ‘The spoils of Annwn’ (Preiddau Annwn).  This poem describes a journey by King Arthur and three ships full of his men to seize a magical cauldron from Annwn.  The verse touches on many important themes:  there is the Celtic idea of the special food vessel (perhaps a forerunner of the Grail);  the cauldron’s cooking fire is kindled by the breath of nine maidens, a group we must irresistibly associate with Morgan le Fay and the nine virgin priestesses of the Isle de Sein off the Breton coast; there is the use of the magic number seven (only seven men return with Arthur from his voyage- just as only seven men return to Britain with Bran the Blessed in the story ‘Branwen, daughter of Llŷr‘ in the Mabinogion)- and there is the idea of a a fairy fortress, my particular interest here.

Arthur’s quest takes him to a stronghold that has various names in the poem.  It is first called Caer Sidi (or Siddi), but it’s also the four-cornered fort, the fort of numbness, the fort of obstruction and the Glass Fort (Caer Wydyr).  Those of us interested in the Arthurian legends could easily be distracted by this last name, which takes us to other mythological sites in the Matter of Britain: to Ynys Witrin, the Isle of Glass, and thence to Glastonbury and Avalon (but that’s another story).

Back to Caer Sidi; this name is translated variously as the Otherworld fort, the spiral fortress and, importantly for us here, the Fairy Fort.  That interpretation derives from a link made between Sidi and the Gaelic sidhe, meaning the Tuatha De Danann, the fairy folk.  Now, it has to be admitted that sidhe properly means ‘peace’ and that it has come to mean ‘fairy’ because it’s an abbreviation of ‘people of peace,’ one of those euphemisms regularly used by people to avoid naming Them directly that I’ve examined before.  It’s not a wholly secure chain of etymology, therefore, but it’s a generally accepted translation and (as I’m no Celtic scholar) I’m content to accept it.

Another Taliesin poem, Kerd Veib am Llyr (Song before the sons of Llyr) also refers to Caer Sidi.  The poet declares that

“Complete is my chair in Caer Sidi/ No-one will be afflicted with disease or old age that may be in it/… Around its borders are the streams of ocean.”

These lines appear to imply that this chair (kadeir- meaning a throne or seat of precedence) is situated on an island and that either the seat or the site confer some sort of eternal youth- that it is a paradise.

Magical, or supernatural, forts are popular with the Welsh poets.  Another example that’s worth mentioning is Caer Arianrhod.  This location features in the story of Math fab Mathonwy, also in the Mabinogion.  Arianrhod herself is one of the children of the goddess figure Don, the Welsh equivalents of the Irish goddess Danu and her offspring, the Tuatha De Danann.  The mythology is all very complicated and it’s easy to get lost, but for present purposes it will suffice us to say that forts and fairies seem to be intimately related in Celtic myth.  Another ancient Welsh poem, Kadeir Kerritwen (the Chair of Ceridwen), describes how the River Enfnys flows around Arianrhod’s court: it is, once again, an island, depicted as being physically separated from the rest of the mortal world as a metaphor for its spiritual separation.  I may add that Caer Arianrhod is also a name for the constellation of the Northern Crown, the Corona Borealis.

Now, we’re not talking here about Caernarfon castle- let’s bear that it mind.  These legends were formulated in the ‘Dark Ages’ when there were no stone medieval castles.  Even Norman motte and bailey strongholds of wood and earth would have been too advanced for the period, so what we have to imagine for all of these locations is a traditional British hill fort, somewhere like Maiden Castle or Hambledon Hill.  Of course, as I’ve only recently discussed, there are longstanding fairy associations with ancient sites, whether hill forts, stone circles or barrows.  That’s why, therefore, in my story Albion awake!, I had the main characters meet the fairy queen Maeve atop the tumulus on the summit of Hambledon Hill.

So, to return to our theme, Fairyland for the Welsh appears always to have been associated with some identifiable feature in the landscape, whether a prehistoric fortification or an island.  The ‘otherness’ and inaccessibility of each particular site presumably derived from its physical features (man-made or natural)  and also from the aura of mystery attached to it: Iron Age hillforts or Neolithic causewayed camps would have been ancient and inexplicable presences, haunted by the spirits of poorly understood ancestors. Possibly too some memories are preserved of the sacredness of lakes and other bodies of water in Iron Age Celtic worship.  There was a gulf in time, as well as some geographical barrier, that separated the observer from the fairy place.

To conclude, then, the Welsh faerie is somewhere near to us, yet faraway.  It might be found either:

I’ve mentioned Robert Graves’ White Goddess before and in it, chapters 5 and 6, he examines the mythology behind the two caers at some length (make what you will of it).

An edited and expanded version of this post will be found in my book Fayerie- Fairies and Fairyland in Tudor and Stuart Verse.  See my books page for more information.