It is well known that fairies try to steal new born babies and that they leave changelings behind in their place.  Here, I want to examine the evidence for the abduction of children older than toddlers and how this is achieved.  Babies can be snatched from their cradles; how are less helpless juveniles abducted?

There seem to be three broad strategies employed by the fairies in taking infants.  They kidnap them, they trick them or they lure them away.  There are ample examples to illustrate all of these ploys.  It was believed that the fairies were always on the lookout for chances to abduct infants (see, for example, Evans Wentz, Fairy Faith, 150).

Obviously, it is easiest to kidnap children if they come willingly.  It is perfectly possible to achieve this by friendly means.  In one Scottish example, a little girl used to regularly play with the faeries under the Hill of Tulach at Monzie.  One day they cut a lock of her hair and told her that next time she visited she would stay with them for ever.  Fortunately, the child told her mother what had happened and she immediately worked various charms and never let her daughter out to play again.  A boy from Borgue in Kirkcudbrightshire used regularly to make extended visits to the Good Folk underground in the same manner; he was protected by suspending a crucifix blessed by a Catholic priest around his neck.  Indeed, in one case from Orkney, a little girl so pestered the local trows with repeated visits to their underground homes that, in their irritation, they breathed on her and paralysed her for life.

The Scottish ballad of Leesom Brand fits with the friendly visit pattern of journey to Faery.  A boy aged ten finds his way to “an unco’ land where wind never blew and no cocks ever crew.”  There he meets with and falls for a woman who is only eleven inches tall.  It is at this point that this story takes a slightly uncomfortable turn.  Despite her small statute this lady was “often in bed with men I’m told” and the young boy, despite his tender years, is no exception; he gets her pregnant, too, and it is this scandal that forces them both the flee back to the human world.

Simply opening the door to a human child might be enough to tempt it in, then. More often, some additional inducement was necessary.  It might be nothing more than playing upon the child’s curiosity, as in the Welsh medieval case of Elidyr.  He had run away from home after an argument and had hidden for two days on a river bank.  Two little men then appeared to him and invited him to go with them to “a country full of delights and sports.”  That was all he required to persuade him to go with them.  Somewhat comparable is the tale of a boy from St. Allen in Cornwall who was led into a Faery by a lovely lady.  He first strayed into a wood following the sound of music and after much wandering feel asleep.  When he awoke, a beautiful woman was with him and guided him through fantastic palaces. Eventually he was found by searchers, once again asleep.  Fascinatingly, Evans Wentz has a modern version of the Elidyr story, told to him near Strata Florida (see Fairy Faith 148;  Hunt, Popular Romances of the West of England, 86, ‘The Lost Child’).

Some children require more material temptation.  On the Isle of Man, a girl was walking over a bridge when three little men appeared to her and offered her a farthing to go with them.  She wisely refused, knowing that consent would place her in their power for ever.  In Northumberland, at Chathill Farm near Alnwick, there was a well-known fairy ring.  It was reputed that, if a child danced around it nine times, she or he would be in the fairies’ control.  To encourage children to do this, the fairies used to leave food and other gifts at the ring and parents, in response, would tie bags containing the age-old remedy of peony roots and seeds around their infants’ necks as a protection against fairy harm.  Elsewhere in the north of England, it has been reported that the fairies would leave out fairy butter as bait for children.

These inducements to stray start to merge into out and out tricks.  For example, a boy lost on Dartmoor was found by his mother seated under an oak tree known to be a pixie haunt.  He told her that “two bundles of rags” had led him away- evidently, pixies in disguise so as to attract his attention and lull his suspicions.  As soon as the lights of his mother’s lantern appeared, these rags vanished (Hunt, Popular Romances, 96).

The kidnap can be covered by means of a changeling put in the abductee’s place.  The son of a blacksmith on the island of Islay, aged fourteen, suddenly fell ill and wasted away.  It was revealed to the father that, in fact, he had been taken by the fairies and a changeling left behind.  This the father exposed with the trick of brewing in egg shells and then violently expelled.  However, he had then to go to the fairy knoll to recover his son rather than the boy being automatically returned (as is the usual practice).  He was working for the fairies there as a blacksmith, which may explain their reluctance to part with him.

Some children are snatched without ceremony.  In one case from the Isle of Man a boy sent to a neighbour’s house to borrow some candles at night was chased on his way home by a small woman and boy.  He ran, but only just kept ahead of them, and when he was back at his home, he had lost the power of speech and his hands and feet were twisted awry.  He remained this way for a week.  This could almost be a changeling story (see Evans Wentz 132).

Waldron tells of a ten-year-old girl from Ballasalla on the Isle of Man who had a lucky escape from such a kidnap attempt.  Out on an errand one day, she was detained by a crowd of little men. Some grabbed hold of her and declared their intention to take her with them; others in the party objected to the idea.  A fight broke out amongst the fairies and, because she had incited this discord, they spanked her but let her get away.  The truth of her account was seen in the little red hand prints marking her buttocks.

I have assumed so far, naturally, that parents would not wish to see their offspring taken to fairyland.  One incident contradicts this.  A woman from Badenoch in the Highlands was given shelter overnight in a fairy hill but, the next morning, she had to promise to surrender her child to them so as to be set free.  She agreed, but was to visit her daughter in the hill.  After a while, with no sign of things changing, the infant complained that she had been abandoned by her mother.  The woman scolded the girl for suggesting this and the fairies ejected her from the hill and never allowed her in again.  This suggestion that fairy abduction might sometimes be a boon for the child is confirmed by another source.  The verse ‘The Shepherd’s Dream,’ in William Warner’s Albion’s England, reveals that changelings were taken from mothers who beat or otherwise abused their progeny.

Going with the fairies need not be prolonged nor unpleasant, fortunately.  Many stories indicate that children will be well cared for in Faery.  A game keeper and his wife lived at Chudleigh, on Dartmoor. This couple had two children, and one morning when the wife had dressed the eldest she let her run away to play while she dressed the baby. In due course, father and mother realised that the child had disappeared. They searched for days with help from their neighbours, and even bloodhounds, without finding her. One morning a little time later some young men went to pick nuts from a clump of trees near the keeper’s house, and at there they came suddenly on the child, undressed, but well and happy, not at all starved, and playing contentedly. The pixies were supposed to have stolen the child, but to have cared for her and returned her. 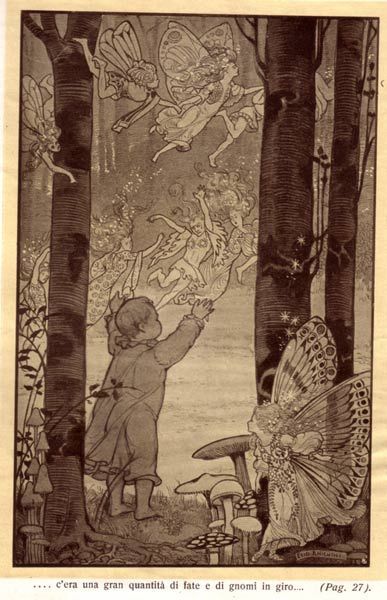 There are, therefore, many ways of luring children into fairyland- some are friendly and almost consensual, others are more underhand and forcible.  The child’s treatment once in Faery will also vary: some will be well cared for and treated as fairy playmates; others may find themselves put to work in menial roles.  I discuss all the many aspects of these abductions and how to avoid them in my recently published book Faery.  The abduction of children is just one aspect of the Darker Side of Faery, a subject explored in detail in my book of that title, published in 2021

4 thoughts on “The Pied Piper of Elfame: fairy abductions of children”