A shameless little bit of self-promotion.  I’ve had the idea in my head for a while to pull together a lot of the Victorian poems I’d collected during my research and I’ve finally now published it.

There’s plenty written on Victorian fairy paintings (Christopher Wood, Jeremy Maas and Beatrice Philpotts), and plenty on the literature of Shakespeare’s time (Latham, DeLattre and Halliwell), but strangely nothing on the outpouring of fairy verse in the 19th century that matched the visual art.  That oversight is now corrected.

The Victorian era saw a peak of popular interest in fairies- in art, literature, popular entertainments and in children’s books. Whilst there are several studies that examine Victorian fairy painting, that have been none that are devoted to the fairy poetry of the era. This book showcases the richness and complexity of this genre of nineteenth century verse.

The book contains an introduction to the subject, followed by a brief survey of fairy poetry from the seventeenth and eighteenth centuries- writers such as Drayton, Herrick and William Blake. The fairy verse of the nineteenth century is then surveyed in themed chapters, which examine good and bad fairies, mermaids, Irish fairy verse, North American poetry and the twentieth century legacy of these writings. Each chapter includes a brief introduction, biographies of the poets and notes and discussion on each of the poems.Over eighty poets are included, from well-known names such as Ruskin, Tennyson and Rossetti to a host of much less well-known fairy writers.

Some of the poems are sickly sweet- as we might well expect, but some are dramatic or dark.  Writers portrayed the more scary side of faery- the taking of children, the abduction of women, the deadly side of mermaid nature- just as much as they depicted wings and wands.  I’ve discussed the austere and haunting poetry of Scot Fiona Macleod before; here’s a complete contrast, ‘The Sick Fairy’ by Mary Eleanor Wilkins Freeman:

Serve it in a buttercup—ah, ’tis very cruel,

That she is so ailing, pretty Violetta!

This is from her collection Once Upon a Time and Other Child Verses, published in 1897 with illustrations by Etheldred Barry, whose plate to accompany the fairy poem ‘Once Upon a Time’ is reproduced here.  Plainly, we’re a long way here from the sadness and magic of Macleod’s fairy nobility.  Nevertheless, I see Freeman’s poem as being just as valid an expression of Victorian fairy beliefs as anything by the more ‘serious’ writers like MacLeod, Yeats or AE.  Her poems still have something important to tell us about how the Victorians saw fairies.

I’ve included a few works by Tennyson and Rossetti, but mostly I wanted to feature lesser known writers, some of whom were prolific in the genre.  As we’re dealing too with English language verse, I’ve included Irish and North American authors as well.  The former shared many aspects of fairy culture with Britain (as well as being part of the same country at the time); US and Canadian writers drew very heavily on British and Irish roots- to the extent, in fact, that as black literary figures emerged, they too adopted the fairy conventions lock, stock and barrel.

I’ve illustrated the book with line drawing by contemporary artist Gertrude Thomson.  She was a friend of Lewis Carroll, who helped him with his life drawing technique as well as finding child models for him to sketch.  In 1898 she illustrated his book of poems Three Sunsets. 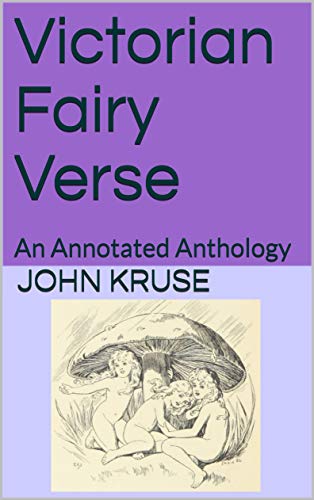 See a list of my faery publications (present and planned) here.