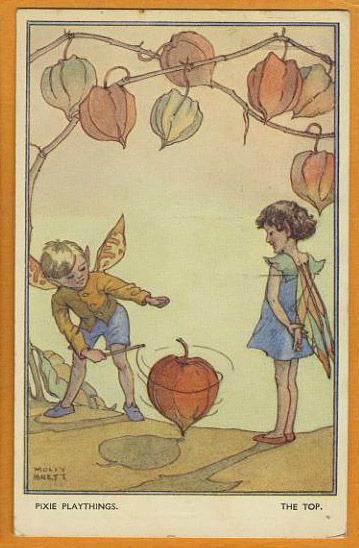 We are familiar with the idea of fairies feasting and dancing, but they have other pastimes too which can make them seem very human indeed.

In both Cornwall and (most frequently) in Ireland, huge hurling matches have been sighted, with hosts of players on either side. Coastal locations seem to be especially favoured for these: the earliest account of pixies seen in Cornwall dates from August 1657 and is a description of a fairy hurling match held in a field of corn at Boscastle.  A large number of white figures were seen taking part and the game surged back and forth until apparently disappearing over a cliff.  The crop was left completely unmarked.  In an Irish story a man called Patch Gallagher is recruited to join one team in a vast sidhe hurling match which ranges over a full sixty miles of Connaught coastline.  Evans Wentz also notes two Irish sightings of hurling matches (Fairy faith pp.41 & 51 and see Marjorie Johnson, Seeing fairies, p.76).

There’s a story from the south of Northamptonshire of a man who joined a fairy game of football. He was, perhaps, a little over-enthusiastic, as he kicked their ball so hard it burst.  He fainted and the fays vanished, but when he recovered, he found that the deflated ball had been left behind and was full of gold coins.  Evans Wentz has an Irish sighting of a football game (p.76) as has Marjorie Johnson- an experience dating to the 1890s (p.86).

It is reported that, during freezing weather in Scotland, the fairies may be heard at night curling on every sizeable sheet of ice.

The medieval Welsh tale of the boy Elidyr and his visit to a subterranean fairyland confirms that the faerie folk enjoyed ball games: Elidyr used to play with the king’s son before he made the dreadful mistake of trying to steal the golden ball they used.  One of Marjorie Johnson’s correspondents described seeing scores of tiny fairies playing ball in a ring under an oak tree, somewhere in mid-Wales (p.232).

The fairies love hunting with hounds, most particularly on the Isle of Man, where they are regularly heard at night coursing across the island. They are often dressed in green with red caps, in great numbers and accompanied by the loud sound of cracking whips.

Horses are often taken from stables and ridden at night until they are exhausted and foamed with sweat. It’s very likely that the fairies are racing against each other as well as enjoying the sheer exhilaration over steeple-chasing over fields and hedges.

Even if no competitive game is involved, it’s clear that the fays love to indulge in energetic and noisy play. Quite often, this is combined with mischief, disturbing human households with the noise they make.  Poet Thomas Heywood referred to them “keeping Christmas gambols all night long,” creating a racket that sounded as if furniture and pots were “about the Kitchen tost and cast/ Yet in the morning nothing found misplaced.”

This sort of revelry is not just seasonal, though: Drayton recorded in The Muse’s Elysium how the fairies would scramble around rooms, overturning stools and tables.  A Manx witness described how he saw fairies playing on beached fishing boats, clambering about in the rigging with great laughter.  George Waldron recounts another encounter on the island in which a man saw some boys playing in a field at about three or four o-clock in the afternoon when they should have been at school.  He went to tell them off but they disappeared as he approached them across the open land.  Much more recent witnesses have seen the fairies engaged in games of leapfrog, chase and playing ring o’ roses (Johnson pp.91, 161, 170, 192 & 258).  This last game, of course, starts to shade into the fairy habit of dancing in rings.