Last night I went to see the new film, Tolkien, at our local cinema.  I read the 2003 book it’s based on, Tolkien and the Great War- the Threshold of Middle Earth, by Garth John, early last year and I was keen to see what they’d made of it.  It was a good film- but not a great one, I thought- which captured the essence of Tolkien’s fascination with languages and myths and the importance to him of his close friends at school, two of whom died in the war.  Nicholas Hoult as Tolkien was especially good but there were too some laughable bits: for example, the depiction of Sarehole Mill, Tolkien’s childhood home, as deep in the Worcestershire countryside, when it was in fact only just on the edge of Birmingham, and the scene in which the British cavalry charged from the frontline towards the German trenches (how exactly do you get a horse either into or out of a trench?)

Anyway, quibbles aside, as regular readers will know, I have several times examined the relationship between the Great War and artistic representations of faery- in postings on Bernard Sleigh and his Map of Fairyland and on the wartime fairy plays.  Tolkien too was powerfully affected by his wartime experiences, as the film seeks to portray. 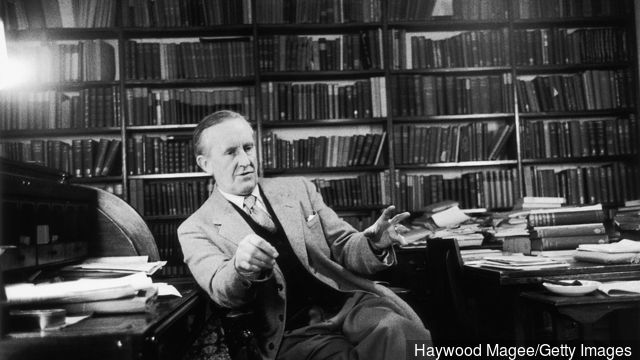 In his  early verse, Tolkien deployed some very fey and conventional Victorian imagery.  For instance, in April 1915, he wrote of Goblin feet:

“I am off down the road,

Where the fairy lanterns glowed…

O! I hear the tiny horns

And the passing of feet of many gnomes a-coming…”

whilst in his poem Wood sunshine of July 1910, the young Tolkien had exclaimed:

At the same time as he wrote these verses, the author was also beginning to formulate the language of the elves.

Tolkien’s early verse is very much in the style of Victorian fairy poetry as a whole, but he was later to reject the kind of imagery he had employed in his youth. Tolkien’s later work is of course a distinct move away from garden sprites; it is the product of much wider reading and deeper thinking and of his experiences in the trenches in the First World War.  He reinvented his fairy world in the tarnished image of men.  Without doubt his service as an army signals officer played a role in changing his elves into something more flawed and serious.

Tolkien’s mythological ideas had begun to form before the start of the war in August 1914 and he had started to compose his first “faërie” verse before his graduation and enlistment in summer 1915.  However, it is widely accepted that his experience of the Somme offensive in July of the next year had a lasting and identifiable impact on his writing.  From then on, the struggle between good and evil became a central theme of his stories, first seen in The fall of Gondolin written in December 1916.  This depicts mechanised warfare that creates vast slaughter and destruction.  Huge battles raging across continents and oceans are also found in the Song of Eriol of November 1917.  The influence of the war can be traced in other elements of his work too: in the theme of last-minute relief forces saving beleaguered troops; in uncoordinated attacks and over-ambitious advances; in the wastes of the Dead Marshes and the Desolation of Smaug.

There are further parallels between the psychological and physical effects of visiting faery, and the sense of the soldier that he cannot describe to civilians what he has witnessed and the feeling that ‘home’ can never seem the same again.  This alienation of the veteran from ordinary society is something experienced by Frodo on his return to the Shire, for example.  Tolkien’s work may be epic myth, then, but it embodies many of the realities of his service career.

My other postings on the Great War give a comprehensive feel for the fairy poetry and literature of the period; see too my posting on composer Rutland Boughton.

The passages above on Tolkien are taken from my as yet unpublished book The Modern Fairy Faith.

8 thoughts on “Tolkien, the Great War and Faerie”