The summer issue of Faerie magazine (now Enchanted Living) is to be an art nouveau special.  Here’s my own brief survey of the influence of this art style on depictions of faery.

Myth and symbolism are central to the Art Nouveau.  The style was based around forms and images drawn from the natural world, but its themes came from folklore, romance and legend.  This means that many of the most famous Art Nouveau artists are also known as fairy artists.

I’ll start with the most famous of all, Arthur Rackham.  His work as an illustrator gave him many opportunities to depict faery scenes and he is very closely associated with books that have supernatural, magical or fantasy themes.  Amongst these well-known series of illustrations are Shakespeare’s plays A Midsummer Night’s Dream and The Tempest, Peter Pan, Alice in Wonderland, Rudyard Kipling’s Puck of Pook’s Hill, Milton’s poem Comus, The Romance of King Arthur, the story of Undine and several collections of fairy tales and fairy ballads, including those by the Brothers Grimm. 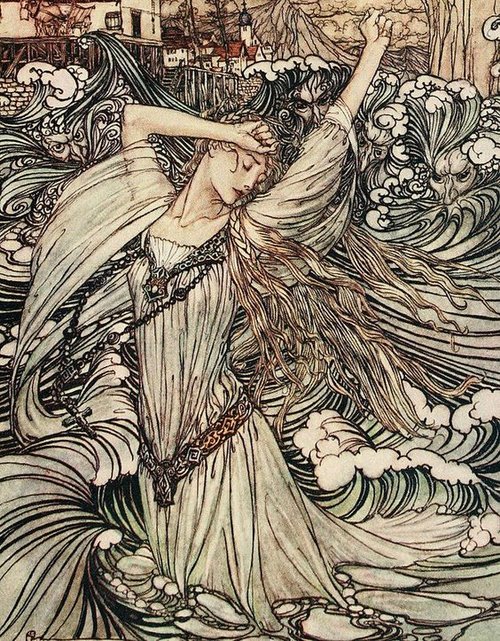 As an English artist, Rackham was strongly influenced by many earlier British artistic movements, such as the Pre-Raphaelites, William Morris and the Arts and Crafts Movement and Aubrey Beardsley. All of these had regularly incorporated magical and mythical themes into their works- especially the romances of King Arthur and the Norse sagas.  If art nouveau is defined by its sinuous lines and flowing organic shapes, we can see how Rackham fits within the genre: his images are identifiable by their twisting foliage, swirling draperies and stylised natural forms.  A picture such as Undine typifies this mix of elegant, swirling line and a veiled erotic rapture.

The most important centre for Art Nouveau in Britain was in Glasgow, focussed around the so-called ‘Group of Four’- Charles Rennie Mackintosh, his wife Margaret, her sister Frances and her husband James Herbert MacNair.  The work of Margaret and Frances MacDonald (as they were before they married) is full of mysticism, symbolism, Celtic imagery and subject matter drawn from literature and folk tales.  Their art has the highly characteristic flowing lines and organic shapes of Art Nouveau and is strikingly beautiful and unique, with elongated figures and rich imagery, such as lush crimson roses and elegant faery queens.

Frances created many memorable and elegant images of magical women, including Girl and Butterflies, The Spirit of the Rose, Ill Omen: Girl in the East Wind with Ravens Crossing the Moon, The Woman Standing Behind the Sun, The Sleeping Princess, and The Moonlit Garden.  There are strong elements of eroticism and of female power in much of Frances’ art.  Her older sister Margaret also painted many enigmatic pictures, such as The Mysterious Garden, The Heart of the Rose, ‘O ye, all ye that walk in the willow-wood’ (based on a poem by Dante Gabriel Rossetti), The Sleeping Princess, The May Queen and The Silver Apples of the Moon.  This last painting takes its title from a poem by W. B. Yeats, The Song of the Wandering Aengus (1899) which describes how a young man once caught a fish that turned into a faery girl with apple blossom in her hair; as an old man he longs to find her again and to walk together plucking “The silver apples of the moon, The golden apples of the sun.”  Yeats was a mystic and folklore expert who had conversations with the faery queen of Sligo and was regularly visited by elemental spirits.  His early poems are suffused throughout with the ancient Irish myths of the Tuatha De Danaan, the fairy family of Dana with their tragic heroines and warrior queens like Etain and The Morrigan.  Yeats’ 1893 collection of verse was titled The Rose and I feel sure that his mystical imagery of the proud, sad, secret red rose in turn inspired the Glasgow Four, for whom the flower became a kind of icon.

The two MacDonald sisters influenced their husbands in turn.  For example, James MacNair painted a picture Tamlaine based upon the Scottish faery ballad, Young Tamlane, in which a girl falls in love with a human boy kidnapped by the fairies and rescues him from the captivity of the jealous fairy queen.  MacNair also invented his own mythology, such as the picture Y sighlu, which seems to show an enchantress in a cave.

Lastly, Charles Rennie Mackintosh, although he is mainly famed for his furniture and for his architecture (such as Hill House and the School of Art in Glasgow), also painted lush pictures of roses and of mysterious tall women, such as In Fairyland, Fairies and the fae vision of Part Seen, Part Imagined, all illustrated here.

The last artist I’ll discuss is nowhere near as famous as his Glasgow counterparts, although he also taught at the Glasgow School of Art.  This is Frederick Cayley Robinson (1862-1927), a painter influenced by Edward Burne-Jones, but who developed his own very personal and individual style.  His pictures are not ornately decorative like those of the MacNairs and Mackintoshes.  Rather, Robinson produced simple, spare watercolour paintings and book illustrations and designed costume and sets for the theatre.  For example, he worked on a 1909 staging of Maeterlinck’s play The Blue Bird, creating some stunning and memorable designs.  Margaret MacDonald Mackintosh also drew inspiration from Maeterlinck’s Seven Princesses.

Amongst Cayley Robinson’s notable faery paintings are In the Wood So Green, an Arthurian incident in which a woman stands alone amongst trees, as a haloed knight rides past her in the background; The Beautiful Castle, another pseudo-medieval setting; the strange druidic scene entitled The Oak Addresses the Spirits of the Trees, the utopian, arcadian The Kingdom of the Future and The Spirit Water, a portrait of a dark-haired naiad.

Art Nouveau was a relatively short-lived artistic movement, but it produced a wealth of images which still captivate our imaginations today- not only because they are beautiful, but because they are full of enchanted and otherworldly beings who can lead us into a world of romance and enigma.

For further discussion, see my book Fairy Art of the Twentieth Century