One of Arthur Rackham’s illustrations of Barrie’s story

This is a slightly amended version of an earlier post, re-posted because the old one was getting bombarded with spam!

Scottish author, J. M. Barrie, is renowned as the creator of Peter Pan, the central character of a play of that name and of two stories Peter Pan in Kensington Gardens (1906) and Peter and Wendy (1911).  I would argue that his work has had a profound influence subsequently upon popular conceptions and conventions regarding faery.  A good deal of Barrie’s material on fairies was drawn from British tradition, in which respect he can’t be criticised.  However, it is what he invented that has probably had to be most profound effect on representations of genre.

The traditional elements in his descriptions of fairy kind include the following:

Significant aspects of the character and abilities of Tinker Bell have nothing to do with British tradition though.  Barrie’s most notable inventions include: 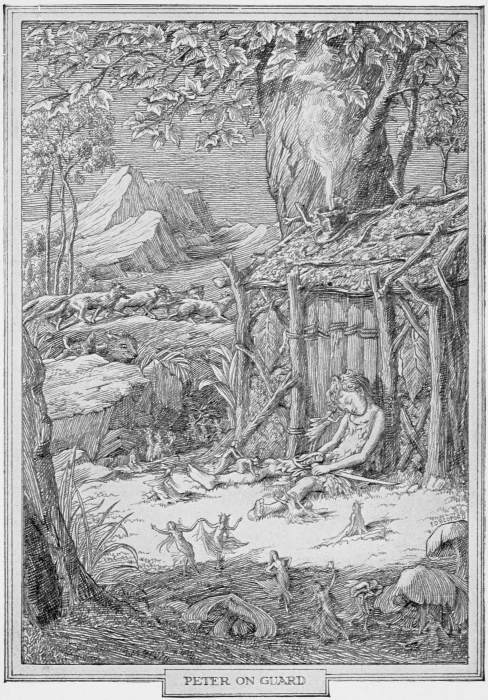 For Barrie, there was a very close link between children and fairies.  This manifests in three ways:

The bond between the delicate and pretty fairies and children that Barrie conjures fits ill with much of the rest of the delineation of their characters- the pinching, the grudges and the cruelty, but it is the ‘natural’ association between infancy and faery that has proved abiding.

Finally, it is also notable that Barrie was not immune to the quasi-adult treatment of fairies that had pervaded much Victorian literature and art.  There is a curious and uncomfortable tension between Peter, Tinker Bell and Wendy, with the two females competing for the attention of and the right to care for Peter.  Tink herself is introduced thus: she was “exquisitely gowned in a skeleton leaf cut low and square, through which her figure could be seen to the best advantage.  She was slightly inclined to embonpoint.”  Later Wendy describes her cattily as “an abandoned little creature” and that aura of wantonness pervades the character.  All in all, Tinker Bell appears to be an adult.  She is “quite a common fairy” and is not very polite, using “offensive” and “impudent” language to Wendy in their squabble over Peter.  This might be read as sexual possessiveness, or it might be the childhood exclusiveness of ‘the best friend.’

In other posts I have examined the impact of other famous literary works on traditional British fairy-lore, books including Harry Potter, the Water Babies and the works of Mrs Ewing.