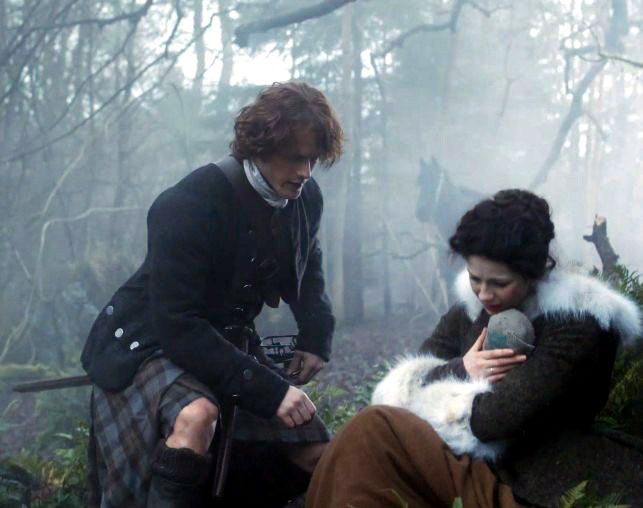 I have recently published an article in Faerie Magazine describing the significance of standing stones and stone circles in Diana Gabaldon’s Outlander series.  The standing stones of Craigh na Dun are central to the story, but there are other fairy incidents in the series that deserve our close attention.

The first scenario involves the finding of a changeling child; this that takes place in the first TV series episode 10 (‘By the pricking of my thumbs’) and in chapter 24 of the book Outlander (which was originally published as Cross Stitch).

These infants are traditionally called shag-bairns or shargies in Scotland.  I’m not sure of the etymology; there’s a Lincolnshire fairy beast called the ‘shagfoal’ which may be related, although this very possibly has connotations of the naturally shaggy nature of the creature; perhaps elvish bairns are also curiously hairy for their age.  Changeling elves usually are described as being thin, wizened and yellow in appearance but abnormal hairiness is not a typical characteristic, as far as I know.

In chapter 24 Claire Fraser is gathering plants in the woods with Geilis Duncan when she finds a baby laid in a hollowed rock, accompanied by a bowl of milk and some wild flowers tied with red thread.  The child looks very ill and, in fact, dies very shortly afterwards.  Claire’s outraged to find the infant abandoned but Geilis tells her not to interfere: the family will be in the vicinity and the child has been left out because it’s believed to have been changed by the fairies, an impression probably arising from the fact that its behaviour has changed and it has started to cry and fuss all the time.  Infants who ceased to develop (who ‘dwined’) and who were constantly grizzling (winicky) were prime suspects of elvish substitution.

In the story, where the baby is found is a fairy knoll and the hope is that the Wee Folk, seeing one of their tribe exposed to the elements, will swap it back and that the parents will be able to retrieve their own child the next morning.  As ever Claire wants to intervene but she is restrained first by Geilis and then Jamie.

The episode is a good representation of Scottish beliefs: James Napier in 1879 described how in the west of Scotland the practice was to take a suspected changeling to a fairy haunt- somewhere where the wind is heard to sough in a peculiar way in the trees, a place that is often near to a cairn, stone circle, green mound or dell.  With certain ritual words the parents would then leave it, along with an offering of bread, milk, cheese, eggs and the flesh or fish or fowl.  They would wait for an hour or two until after midnight and return to where the baby had been left in full expectation that the offering would have been taken and that this would be a sign that the fairies had accepted their own back again and had restored the human babe.  The Outlander account could almost be modelled upon Napier’s description.  The mention of red thread is also authentic as this was used to protect children and cattle from being taken by the fairies; it would be tied around their necks as a sort of amulet. (Napier, Folk lore or superstitious beliefs in the west of Scotland within this century).  The offering of milk is authentic, for the fairies’ love of dairy products is well known, and the hollowed rock also fits with tradition (although often it was milk and beer that were poured into cup-shaped stones as offerings to the fairy folk.)

Gabaldon captures effectively the desperate response of many communities to the possibility of an elf being substituted for a healthy child.  In what may appear to border upon irrationality, there was a conviction that only by forceful means could the changeling be expelled and the real baby recovered.  This undoubtedly led to a good deal of child abuse- not just exposure but burning, drowning and beating.  For example, in one Cornish case the frantic mother recruited her neighbours too to help her batter the pixie-substitute with brooms before leaving it overnight by a church stile.  In the Outlander episode the infant dies, although not directly at the hands of its parents.  Another Scottish remedy was what was called ‘nine mother’s meat’- the anxious parent would visit nine other mothers in her vicinity and beg from them each the gift of three different sorts of food which, being fed to a sickly child, would save it from abduction.

In Outlander this superstitious and powerless mood is reflected in the fact that Jamie Fraser, whilst being a rational man whose tutor taught him German, Latin and Greek and who has studied history and philosophy in France, will neither sleep on a fairy hill at night nor dare to contradict his neighbours in the matter of the taking of children by the fairies.

An t’each uisge– the water horse

The second mythical creature that appears in the first book, albeit a little more briefly, is the ‘water horse.’  It features in two separate chapters of Cross Stitch, although the second addresses more contemporary ideas of monsters and legend.

In chapter 18 Rupert tells stories to the encamped Highlanders.  One concerns the waterhorse of Loch Garve, who takes a fancy to a human wife and carries the woman to his home beneath the waves.  It’s icy and unhappy down there. so he gets a human builder to construct a fireplace for her so that she can warm herself by her hearth and cook proper hot human food, instead of subsisting upon snails and waterweed like her husband.  In the next chapter Claire actually sees the waterhorse, except in the story it’s the Loch Ness monster, a prehistoric plesiosaur risen from the depths.

Diana Gabaldon’s version of the waterhorse is a good deal more benign that the folklore original.  It’s true that the traditional kelpie carries off humans on its back, but this is not for the purpose of abducting a likely wife but rather with a view to drowning and consuming the hapless rider.  Often all that remains are the victim’s heart and lungs, which are washed ashore by the side of the haunted loch.  The true waterhorse– and related beasts- are all dreaded for their penchant for devouring unwary travellers and careless children.  Some will set out to charm and seduce mortal females, but this is only as a preliminary to their destruction.  No serious or long term affection is involved.

Whereas the changeling incident in Outlander confronts the harsh treatment of sickly children in earlier times, the fresh water monster is rationalised and made benign and thoughtful.

You can read my Outlander article here (FM#44_StandingStones).  I discussed fairies and megaliths more generally in a much earlier posting on the blog, too, and also covered the subject in my book, British fairies.

3 thoughts on “Fairy lore in ‘Outlander’”