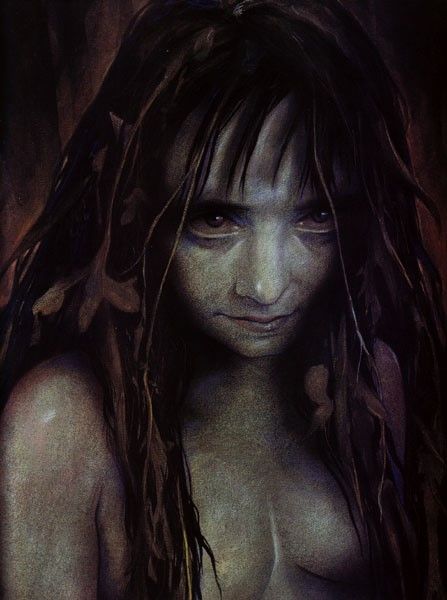 In this post I want to explore a very particular form of British fairy being, the freshwater mermaids or water sprites.  Mere, meaning a lake or pool, is an old English word that forms the basis of mermaid, although of course this almost exclusively used in reference to the sea fairy now.  Nonetheless, the idea of the inland ‘mere-maid’ is very ancient, the very oldest of these very likely being found in the Anglo-Saxon poem Beowulf, in the ghastly shape of the mother of the monster Grendel.

The illustrations I have found suggest that these creatures may be sexually alluring to some extent, but on the whole they are perilous to humankind. 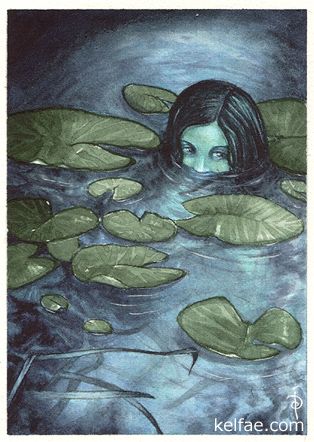 The majority of our fresh water meremaids share something with Grendel’s mother: they are dangerous, if not fatal, to humans.  A very good example is the creature dwelling in the Black Mere at Morridge in Staffordshire.  No animals would drink the waters and birds were said to avoid overflying the mere.  This was probably because the mermaid used to seize passersby at midnight and drown them.  When an attempt was made to drain the Mere, she emerged and threatened to engulf the whole of the nearby town of Leek in its waters.  Wisely, the work was abandoned and never restarted.

Other mere maidens include those of the ponds, pools and meres at Fordham, Cambridgeshire and in Suffolk at Rendlesham and most notably at the Mermaid Pits, Fornham All Saints.  All these beings came out at night to drag down their victims.  Most are anonymous, but a few have been given names, for example Jenny Greenteeth, who has been encountered at Ellesmere in Shropshire as well as in Lancashire and Cumbria, Grindylow in Yorkshire, Nelly Longarms and the widespread Rawhead and Bloodybones.  In Scotland one encounters the fideal, an evil spirit who haunts Loch na Fideil near Gairloch, in the north-west Highlands; she is often regarded as a personification of the entangling bog grasses and water weeds of the loch’s shore.

It is often said that the purpose of these creatures was to teach children to steer clear of ponds and similar drowning dangers, such as lawn-like mats of pond weed.  The same risk existed around river banks, so that we hear  of ‘Peg Powler’ at Piercebridge on the River Tees, who might drag incautious children from the banks under the waves, and of comparable perilous creatures in the River Gipping in Suffolk.

All of these supernaturals preyed upon passing mortals.  Despite this bad reputation (or possibly because of it) some were also connected to gold or treasure in some way.  A beautiful maiden at Child’s Ercall in Shropshire offered two men gold if they would enter the water to take it from her (but she disappeared when they commented upon their luck, surely a variation of the common idea of keeping quiet about fairy favours).  We must wonder too whether,  if they had entered the water, the outcome might not have been as happy as they anticipated.  At Marden (Herefordshire) and Rostherne Mere (Cheshire) the mere-maids are said to be guarding bells submerged beneath the pool.

The last creature to discuss is perhaps the most intriguing, the asrai or ashray of Cheshire and Shropshire (no specific locations seem to be identified).  This meremaid combines many of the features already mentioned.  However, the fairy maid is portrayed as far more vulnerable than those seen before.  If she is caught, she does not fight back like some of the creatures mentioned, she instead pleads in an incomprehensible language to be set free and, when she is not, she curls up moaning in the fisherman’s boat and has melted away by the time he reaches shore at daybreak. Where her hands had touched the fisherman, he was burned and marked for life.

Other versions of the folk belief say that asrai have green hair and either a fishtail or webbed feet.  They are reputed to live for many centuries, coming to the surface of the lake once each century to bathe in the moonlight, which helps them to grow. If the asrai sees a man she will use promises of gold and jewels to attempt to lure him into the deepest part of the lake, there to drown or simply to trick him. She cannot tolerate human coarseness and vulgarity, and this will be enough to frighten her away.  Curiously, the same has been said of other fairies: Lewis Spence recorded that a woman of Loch Aline in the Highlands escaped abduction by the fairies when she used “a very coarse, unseemly word” (as well she might in the circumstances).  The sidhe could not tolerate this and left her where they found her (Lewis Spence, The fairy tradition in Britain, p.264).

Scottish poet Robert Williams Buchanan described the asrai evocatively, if not wholly in line with oral tradition.  In his poem ‘The asrai- prologue to the changeling‘ he says that:

“Before man grew of the four elements
The Asrai grew of three- fire, water, air-
Not earth, -they were not earthly….

The Asrai wander’d, choosing for their homes
All gentle places- valleys mossy deep,
Star-haunted waters, yellow strips of sand
Kissing the sad edge of the shimmering sea,
And porphyry caverns in the gaunt hill-sides.”

In his sequel poem ‘The changeling‘ Buchanan tells us that “of the dew and the crystal air,/ And the moonray mild, were the Asrai made.”  Because, “In the glorious gleam of the natal ray,/The pallid Asrai faded away!” they were forced to retreat “far away in the darkened places,/ Deep in the mountains and under the meres.”

The most intriguing aspect of the asrai belief is the combination of predatory danger and vulnerability when caught.  It is comparable to the Scottish selkies, the seal women, who can be trapped and forced into marriage with a human if their seal skins can be stolen from them.  Perhaps in both we see the idea of the dangers of travelling between elements or dimensions.  Humans who visit fairyland can suffer both physically and mentally, and these stories demonstrate that the reverse is just as true.  The supernatural stranded in the physical world loses his or her power and is prey to mortality. 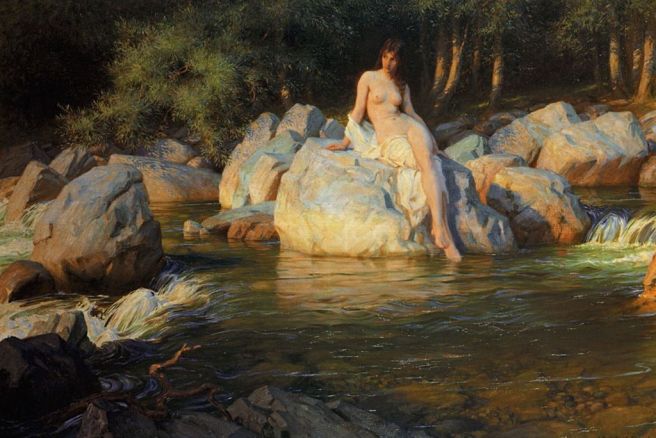 I have discussed the capture of fairies more generally before and have also outlined mermaid belief in an early post.  See too my discussion of the ‘water horse‘ incident in the first book of the Outlander series.