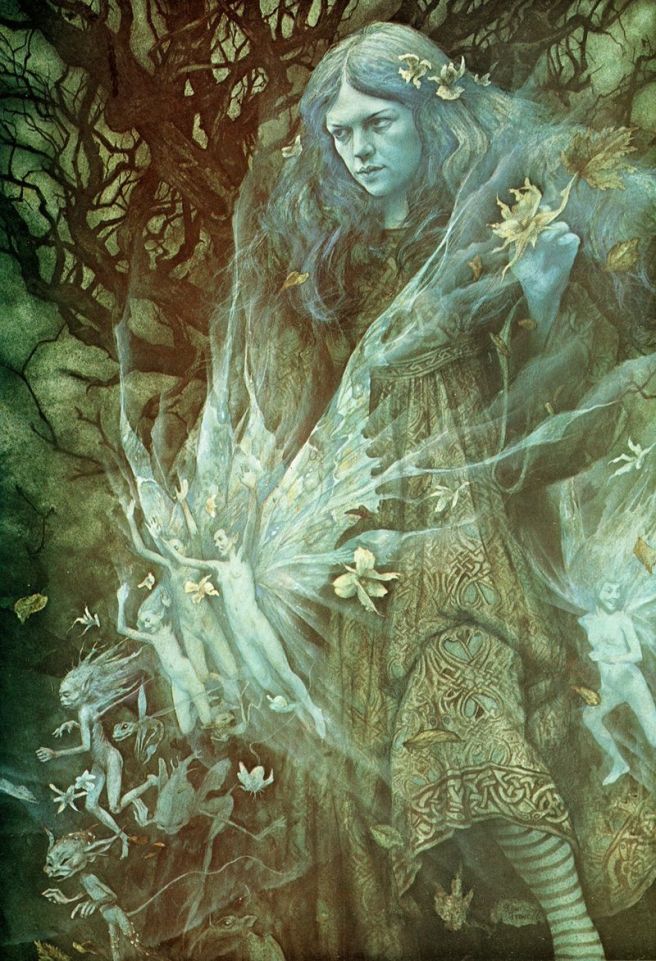 I take the title of this posting from one of the Anglo-Saxon herbals or Leechbooks.  Our forebears diagnosed a number of ailments which they ascribed to malign fairy intervention; one of these was called ælfadl (which we may roughly translate as elf- addle today).  Its nature is uncertain- it appears to involve some degree of internal physical pain- but I have co-opted it to describe the mental health effects of contact with our fairy neighbours.

It’s pretty widely known that a visit to fairyland can have serious physical consequences. Because time may pass more slowly in Faery, the returning visitor may discover that their few hours away were really years or centuries, so that they return to a land wholly unfamiliar to them and where they often crumble away to dust as soon as they have contact with the food or soil of the mortal world. The ill-effects may be less drastic than this, but nevertheless contact with the otherworld can lead to permanent disablement by the fairies.

Less well-reported are the psychological ill-effects of a sojourn with the fays.  We can piece together the evidence from various sources across the centuries.  In seventeenth century England John Aubrey collected a story concerning a shepherd, employed by a Mr Brown of Winterbourne Basset in Wiltshire, who had seen the ground open and had been “brought to strange places underground” where music was played.  As Aubrey observed of such visitors, they would “never any afterwards enjoy themselves.” (Briggs, Fairies in Tradition, p.12).

Later the same century the Reverend Robert Kirk met a woman who had come back from Faery; she ate very little food and “is still prettie melanchollyous and silent, hardly seen ever to laugh.  Her natural Heat and radical Moisture seem to be equally balanced, lyke an unextinguished Lamp, and going in a circle, not unlike the faint Lyfe of Bees and some Sort of Birds that sleep all the Winter over and revive in the Spring” (Kirk, Secret commonwealth chapter 15).  The ‘half-life,’ withdrawal or hibernation that Kirk seems to be describing here is mentioned elsewhere in Scotland.  On Shetland it was believed that the trows might steal part of new mother, that part that remained at home seeming ‘pale and absent.’  (Magical folk, p.132)

The Shetland trows would also take children for a while, but released them at puberty.  Back with human society, they always maintained “an unbroken silence regarding the land of their captivity.”  Indeed, that silence could be physically enforced: in Ireland it was believed that “the wee folk puts a thing in their mouth that they can’t speak.” (Spence, Fairy tradition, p.262)

W. B. Yeats was fascinated by this condition and reported that those who’d been ‘away’ were always pining with sorrow over their loss of fairy bliss.  They had a cold touch and a low voice.  They seemed to have lost part of their humanity and would be queer, distraught and pale, ever restless with a desire to be far away again.  Yeats was told by one woman from the Burren that:

The symptoms of having been ‘away’ are a dazed look, vacant mind, fainting fits, trances, fatigue, languor, long and heavy sleeping and wasting away.

Sometimes it is hard to determine whether the after-effects are psychological or physiological (though one may lead to the other).  The Reverend Edmund Jones in his history of Aberystruth parish in Wales described a neighbour and good friend who had been absent with the fairies for a whole year.  When he came back,  “he looked very bad.” (p.70)  Likewise Jones wrote in another book on spirit apparitions in Wales that the experience was debilitating and left the revenant sickly and disturbed; often the person would fade away and died not long after their return home (The appearance of evil paragraphs 68 & 82).  In Welsh belief of the time, in fact, even seeing fairies might prove to be a premonition of the person’s death (paras 56, 62, and 69).

An example of being elf-addled comes from the well-known story of the House on Selena Moor, in Bottrell’s Traditions and hearthside stories of the West of Cornwall (1873, pp.94-102).  Pixie led on the moor, a Mr Noy finds a farmhouse at which a celebration is taking place.  As he approaches, he meets a former lover whom he thought dead, but who has actually been captured and enslaved by the fairies.  She warns him not to touch the fairy food and drink, as she had done, and tells him something of the fairy life.  The experience of seeing the fairies, and of knowing his lost love still to be alive in fairyland, deeply affected him:

“From the night that Mr. Noy strayed into the small people’s habitation, he seemed to be a changed man; he talked of little else but what he saw and heard there, and fancied that every redbreast, yellow-hammer, tinner (wag-tail), or other familiar small bird that came near him, might be the fairy-form of his departed love.

Often at dusk of eve and moonlight nights, he wandered round the moors in hopes to meet Grace, and when he found his search was all in vain he became melancholy, neglected his farm, tired of hunting, and departed this life before the next harvest. Whether he truly died or passed into fairy-land, no one knows.”

Noy had had no physical contact with Grace nor had he partaken of the fairy fruit and beer- otherwise he would never have been able to return home at all.  Nevertheless, what he saw and heard was enough to blight the brief remainder of his life.

It’s worth recalling here too that prolonged physical contact with the fairies- a sexual relationship with a supernatural lover, perhaps in the course of a prolonged partnership or marriage- can have both physiological and psychological consequences.  It can often be fatal, whether almost immediately or over time.

A visit to fairyland need not be harmful.  Many travellers come and go unscathed. Some are even transformed for the better by the experience.  As alluded to earlier, girls might be abducted by the Shetland trows but returned to their homes when they reached adulthood.  They would be restored to their families “in maiden prime with a wild unearthly beauty and glamour on them.” (Magical folk p.132)

To close, time spent in faery must always be viewed as potentially perilous.  Even if the person is not enslaved or entrapped, they can still be affected long term by the experience, both physically and mentally.

Morgan Daimler has posted on fairy possession on her blog, looking particularly at the Anglo-Saxon and old Irish evidence for the problem and its treatment.  See also my posting ‘Some kind of joy’ which looks at the positive aspects of fairy encounters.

An expanded version of this text will appear in my next book, Faery, which will be published by Llewellyn Worldwide in March 2020.

26 thoughts on “‘Elf addled’- the ill effects of faery contact”