English writer John Aubrey, in his Miscellanies (1695), has the following record for 1670:

“Not far from Cirencester was an apparition.  Being demanded whether a good spirit or a bad, returned no answer, but disappeared with a curious perfume- and a most melodious twang.  M. W. Lilly believes it was a fairie.”

That there might be a peculiar odour (and sound) associated with faery is a rare aspect of the folk lore accounts, but there are traces of suggestive evidence.  Aubrey’s account implies (I think!) that the smell was not unpleasant.  One Cornish tale, of the miser on the Gump at St Just (Hunt, Popular romances of the west of England, p.85) describes how the appearance of spriggans was accompanied by the odour of flowers filling the air.  The fairies meanwhile scattered flowers which instantly took root.

It was also believed that sweet scents would attract spirits.  The Renaissance philosopher and magician Cornelius Agrippa in his Occult philosophy described how to summon such beings as fairies of rivers, woods and fountains, nymphs, satyrs, dryads, and the hobgoblins and fairies of fields and meadows (Book III cc.16, 19 & 32).  He recommended the use of “odoriferous perfumes with sweet sounds and instruments of music” in combination with circles, incantations and offerings of food and drink (Book IV).

Generally, though, the scent associated with fairies is not so pleasing.  In his Second Manx Scrapbook W. W. Gill advises that the upper parts of glens are the best places to see, hear and smell Manx fairies.  What you will encounter is “a stale, sour smell”, apparently.  The nature of this odour may be explained by an Irish tale.  Biddy Mannion was abducted to act as nurse to the sickly infant of the king and queen of faerie.  After successfully caring for the child she was permitted to return home- but not before an ointment was rubbed on her eyes.  This revealed that she was in a frightful cave full of dead men’s bones, which had “a terribly musty smell.”  I have mentioned before the association of fairies with the dead, of which this is another demonstration.

Additionally, and for the purposes of comparison, I was interested to read that, in the Philippines, it is said that the smell of damp earth on a hot day, as it there had just been a downpour, is a sign of the presence of supernaturals.  In Tagalog this is called maalimuom or masangsang (Jaime Licauco,  Dwarves & other nature spirits, 2005, p.8).

Twentieth century spiritualist Edward Gardner has something to say on these matters. He is quoted in Sir Arthur Conan Doyle’s 1921 book on the Cottingley fairy incident, The coming of the fairies.  In chapter VIII Garner provides the theosophical view on the nature of fairies and states that they have no language as such (or none that mortal ears can hear, anyway), but communicate by means of sound and music.  More conventional fairy lore stresses the fairies love of music and dancing for entertainment- as I have discussed before.  Musical tones generated by the fairies themselves is a rather different concept- but perhaps some witnesses assumed the sounds heard came from instruments and not the fairy beings themselves.

Secondly, both Gardner and his colleague, Geoffrey Hodson, linked fairies intimately with flowers.  They saw fairies as nature spirits whose function was to help plants and flowers grow and reproduce.  This being the case, if any scent could be linked to these elementals, it would be that of blossom. Hodson  perceived the smell of flowers as akin to musical chords.

The evidence is sparse, but what little there is certainly gives us a new and intriguing perspective on the denizens of Faery.  The best that can be said is that, for some at least, the experience of encountering supernaturals is not solely a visual impression. 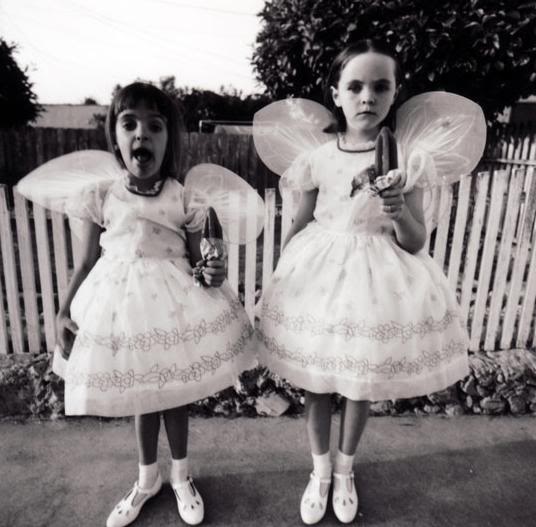 An image from the photo shoot for the 1993 album ‘Siamese Dream’ by Smashing Pumpkins.  The (reissued) album cover features at the top; it’s not Nirvana, I know, but it’s the same era and genre, it’s got fairy wings and it’s one of my favourite albums, so why not….?  For fuller details of my writing and blogging on music, please see my website.