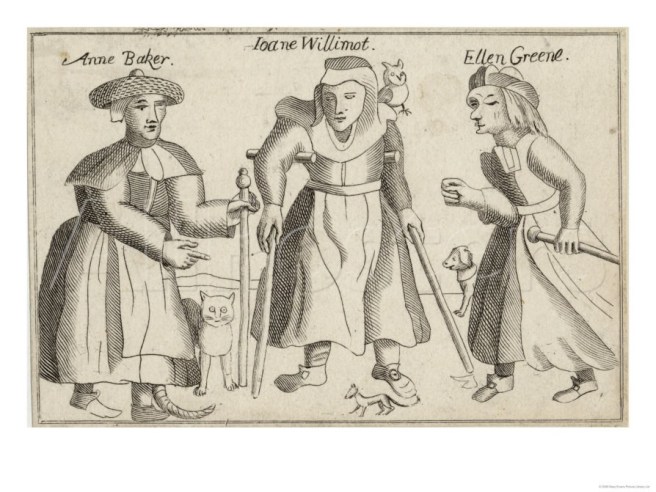 Fairies and witches have long been seen as linked and comparable, as the title quotation from Thomas Dekker’s The Spanish Moor’s Tragedy illustrates (Act III scene 2).  In his book on witchcraft, Geoffrey Parrinder observed that “there is undoubtedly much similarity between the activities ascribed to fairies and to witches.”  These included the ability to fly, their preference for night time, their thefts of children and the foyson of food and their ability to kill remotely.

These links and crossovers are of longstanding.  For example Chaucer in The Merchants Tale mentions “Pluto, that is the king of faerie” (i, 10101) and Dunbar in The Golden terge also alludes to “Pluto, that elricke incubus/ In cloke of grene…”  One of the charges made by the English against Jean d’Arc was that she had frequented the Fairy Tree at Dompre and had joined in the fairies’ dances.

By the sixteenth century the two beliefs were very confused and intermixed.  Old women were accused of being witches and of flying in the air or dancing with the fairies, even though, as Reginald Scot pointed out, their age and lameness could make them “unapt” for such activities (Discovery of witchcraft Book V c.IX and Book XII c.III).  Fairies attended the witches sabbats and left rings on the grass  whilst the witches would visit the fairy queen in her hill (Daemonologie c.V).  Hecate, the mother witch and the queen of fairy all became compounded in the popular mind, as with the Gyre-Carlin or Nicnevin of Lowland Scotland; she rode at night with her court of ‘nymphs’ and incubi (Sir Walter Scott, Minstrelsy, ‘On fairies’ IV).  Oberon became the ‘king of shadows’ in Midsummer Night’s Dream.  It was believed that the habit of taking of changelings was because the fairies had to pay a tithe of souls to Hell each year.  In George Peele’s Battle of Alcazar “You bastards of the Night and Erebus, Fiends, fairies, hags” are summoned (Act IV, scene 2) and in Spenser’s Epithalamion it is prayed “Ne let the Pouke, nor other evil sprights/ Ne let mischievous witches with their charms/ Ne let hob Goblins, names whose sense we see not/ Fray us with things that be not” (lines 340-3).  Witches obeyed the commands of the fairy queen, Diana or Herodias, according to Scot (Book III c.XVI).  In summary, hell and fairyland became essentially identical and for Reginald Scot the terms fairy and witch were interchangeable.  Likewise for John Lyly, writing Endimion in 1585: for him fairies were synonymous with ‘hags’ and ‘fayre fiendes’ (Act IV, scene 3).

To this mix the Reformation added another layer of confusion and prejudice.  Puritans had two objections to faery.  Firstly, it had to be accommodated with scripture and, as the fairies weren’t angels, they had to be devils.  Secondly, fairies were one of the impositions of Rome.  King James VI condemned the belief as “one of the sortes of illusiones … of Papistrie” (Daemonologie, c.V).  In Richard Corbet’s Rewards and fairies “the fairies were of the old profession/ Their songs were Ave Maries/ Their dances were procession.”  Dr Samuel Harsenet, Archbishop of York, in his 1603 Declaration of egregious Popish Impostures called Mercury ‘Prince of the fairies’ and asked “What a world of hel-worke, devil-worke and Elve-worke, had we walking amongst us heere in England” when the Popish mists had fogged our eyes?  Later he declared “These are the times wherein we are sicke, and mad of Robin Goodfellow and the devil, to walke again amongst us…” (pp.134 & 166).

A rational few, such as Reginald Scot, dismissed the belief in witches as delusion and knavery, just as much as the dwindling belief in fairies, and felt sure that in time to come both would be equally ‘derided and contemned’ (Book VII c.II).

Sadly, such rationality was slow to establish itself and in the short term the witch craze swept Britain between about 1550 and 1650.  Diane Purkiss, in The witch in history (1996), has observed how fairy beliefs were converted into witch beliefs and were reproduced in the accusations and confessions of witches.  In fact, a range of materials were recycled by people- plays, ballads, news gossip, chapbooks- to create their own stories and to reflect their own agendas, concerns and conflicts.  For example, Joan Tyrrye applied the common ‘fairy midwife’ story to herself, saying that she was blinded in one eye by a fairy she met in Taunton market.  Others spoke of witches appearing dressed in green, the fairy colour.  The problem was that, in the prevailing intellectual climate, old wives’ tales of fairyland were no longer credible and were instead interpreted as accounts of demons.

Some ‘cunning folk’ (healers and herbalists) tried to argue that through the fairies they only practiced white magic and that the supernatural help they received was only to cure and to do good.  For example, Bessie Dunlop of Ayrshire was accused in 1578 of sorcery and witchcraft.  She admitted that the fairies had helped her heal sick people (and cattle) and to find lost things.  Likewise, Alison Pearson of Byrehill faced similar charges in 1588: she pleaded that a green man had introduced her to the fairy court and that the fairies had taught her remedies.  Joan Tyrrye of Somerset swore that the fairies gave her only good and godly powers and showed what herbs would rid folk of witchcraft.  John Walsh of Dorset said that he too was taught by the fairies under the hills to recognise and treat those bewitched.

These justifications were often advanced; other examples are Isobel Haldane of Perth in 1623, Agnes Hancock of Somerset in 1438, Andro Man of Aberdeen in 1597, Christian Livingstone of Leith in 1557 and, in 1616, Elspeth Rioch and Katharine Jonesdochter of Orkney.  All claimed to have been taught by the fairies, in Man’s case by the fairy queen herself.  Such a defence seldom helped the accused, even when the supernatural powers acquired were used to alleviate the effects of witchcraft or fairy affliction.  Sir Walter Scott observed sadly that “the Scottish law did not acquit those who accomplished even praiseworthy actions, such as remarkable cures, by mysterious remedies” (Demonology letter VI).  For the accusers there were no ‘good spirits’; the suspected witches had consorted with the devil and there could be but one conclusion: Rioch, Jonesdochter,  Dunlop and Pearson, for instance, were all burned.  In the climate of the time, any contact with fairies rendered the person automatically a witch.  Communication with the fairy court was a primary charge against Alison Pearson and against Jean Weir of Dalkeith in 1670.

It is to be noted that gifts of healing and prophecy are not traditionally associated with faery.  There are a couple of Highland examples of endowment with musical abilities and there is the fictional account of True Thomas the Rhymer, who was given seer’s powers by the fairy queen (despite, as Sir Walter Scott puts it, his objections to “this inconvenient and involuntary adhesion to veracity, which would make him, as he thought, unfit for church or for market, for king’s court or for lady’s bower”).  That these supernatural attributes are ascribed to fairies only in witch trials is a strong indicator that they were being turned to as a less serious justification for the accused’s former activities.

Witches were believed to have familiars who guided and assisted them.  Academic and writer Diane Purkiss has suggested that stories told of brownies and other household fairies were reformulated by those suspicious of witchcraft and were understood instead to be accounts of demonic familiars (see The witch in history pp.135-138 and Troublesome things pp.153-4).  This is definitely explicit in a pamphlet from 1650, The strange witch at Greenwich, that described the mischievous tricks of a particular spirit, such as throwing utensils and clothing around, along with “other such reakes and mad merry pranks,as strange as ever Hobgoblins, pinching fairies and Robin Goodfellow acted in houses in old times among Dairy Wenches and kitchen Maides.”

The records show that these often seemed to have ‘traditional fairy’ names such as Robin, Piggin, Hob and Puckle.  Admitting regular contacts with a fairy would be interpreted and condemned as possessing a familiar.  For example, Joan Willimot of Rutland had a spirit called Pretty blown into her mouth in the shape of a fairy.  It subsequently visited her weekly and identified to her those of her neighbours who were “stricken and forespoken” (i.e. bewitched).  Anne Jefferies of St Teath, Cornwall, was carried off the fairyland by six tiny green men and was given ointment to cure “all distempers, sicknesses and sores” (such as the falling sickness and broken bones) and was also granted the power to make herself invisible at will.  When she was arrested, it was alleged that these fairies were in fact her imps or familiars.  She denied this, saying rather that they quoted scripture to her.

In some cases the supernatural contact seemed more obviously evidence of black magic.  Katherine Munro, Lady Fowlis, “made us of the artillery of Elf-land to destroy her stepson and sister in law” (Walter Scott, Letters on demonology, letter V).  Elf-bolts (flint arrow heads) were fired at pictures or her two victims.  Similarly, Isobel Goudie of Nairn visited the fairy queen’s court and saw Satan and the elves making the arrow heads with which Goudie and other witches then slew various people.  Other such instances from Scottish witch trials are Katherine Ross, 1590, Christiane Roiss, 1577 and Marion McAlester, 1590.  We can see here how fairy beliefs had become interchangeable with witch beliefs, so that elf-shot had been converted into bewitching.

To conclude, it is convenient to quote Sir Walter Scott in his sixth letter on demonology:

“With the fairy popular creed fell, doubtless, many subordinate articles of credulity in England, but the belief in witches kept its ground. It was rooted in the minds of the common people, as well by the easy solution it afforded of much which they found otherwise hard to explain, as in reverence to the Holy Scriptures, in which the word witch, being used in several places, conveyed to those who did not trouble themselves about the nicety of the translation from the Eastern tongues, the inference that the same species of witches were meant as those against whom modern legislation had, in most European nations, directed the punishment of death. These two circumstances furnished the numerous believers in witchcraft with arguments in divinity and law which they conceived irrefragable. They might say to the theologist, Will you not believe in witches? the Scriptures aver their existence;—to the jurisconsult, Will you dispute the existence of a crime against which our own statute-book, and the code of almost all civilized countries, have attested, by laws upon which hundreds and thousands have been convicted, many or even most of whom have, by their judicial confessions, acknowledged their guilt and the justice of their punishment? It is a strange scepticism, they might add, which rejects the evidence of Scripture, of human legislature, and of the accused persons themselves.”

This rational analysis did many poor creatures little good: the Bible commanded that “thou shalt not suffer a witch to live” and those clinging to older traditional beliefs and practices could find themselves trapped and accused.  In the early modern period the frame of belief had shifted and no space remained for benign spirits.  Thomas Heywood captured this in Hierarchy of the blessed angels (1635), when he spoke of:

“…wicked spirits, such as we call/ Hobgoblins, Fairies, Satyrs, and those all/ Sathan by strange illusions doth employ…”

Fortunately for the hapless victims of the witch hunts, humanism and scientific rationality eventually displaced Protestant scaremongering.  Nonetheless, once established, the associations between fairy and sorcery were hard to sever: it is surely no coincidence that Shelley labelled his Queen Mab as “queen of spells” in his eponymous poem.