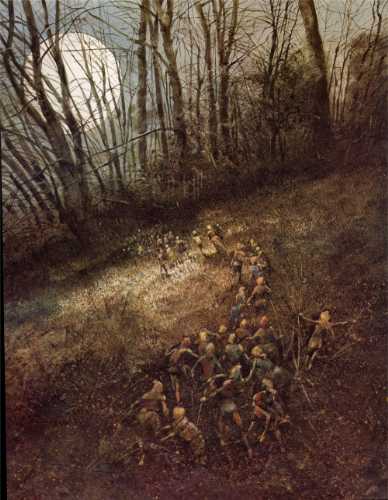 Fairy-kind has always had a strong association with the past.  In my previous posting on their clothing, I noted the common tendency to imagine fairies in antiquated fashions typical of earlier eras.  This temporal distance seems to have had the function of emphasising or marking their separation from humankind.

Fairies- things of the past

Fairies are ‘things of the past’ in another sense: they have frequently been thought of as a race that is no more seen or that has departed from these lands.  By way of illustration of this, Katherine Briggs entitled one of her books ‘The vanishing people.’  Some readers may also call to mind the fact that Tolkien concludes Lord of the Rings with a departure of the elves into the west.  He built upon well established foundations.

This idea that fairies have disappeared or are no longer present in Britain has been a feature of fairy-lore for centuries.  Chaucer, for example, had the Wife of Bath on her journey to Canterbury begin her story thus:

Of which that Britons speken greet honour,

The elf-queen, with hir joly companye,

Daunced ful ofte in many a grene mede;

This was the olde opinion, as I rede,

I speke of manye hundred yeres ago;

But now can no man see none elves mo.”

Later writers have repeated this theme.  For example, in The Faithful shepherdess (III 1) Fletcher expressed the view that “Methinks there are no goblins, and men’s talk/ That in these Woods the Nimble Fairies walk/ Are fables.”

It would be fair to say that the citations given so far probably reflect the urban, educated, cultured view, in contrast to the beliefs of ‘simple’ country folk, but traditional folk tales have also featured and explained the reduction in the sightings of our supernatural neighbours.  For example, there is the Scottish story of ‘The departure of the fairies’ recounted by Hugh Miller in The Old Red Sandstone, p. 251.

‘On a Sabbath morning, all the inmates of a little hamlet had gone to church, except a herd-boy, and a little girl, his sister, who were lounging beside one of the cottages, when just as the shadow of the garden-dial had fallen on the line of noon, they saw a long cavalcade ascending out of the ravine, through the wooded hollow. It winded among the knolls and bushes, and turning round the northern gable of the cottage, beside which the sole spectators of the scene were stationed, began to ascend the eminence towards the south. The horses were shaggy diminutive things, speckled dun and grey; the riders stunted, misgrown, ugly creatures, attired in antique jerkins of plaid, long grey clokes, and little red caps, from under which their wild uncombed locks shot out over their cheeks and foreheads. The boy and his sister stood gazing in utter dismay and astonishment, as rider after rider, each more uncouth and dwarfish than the other which had preceded it, passed the cottage and disappeared among the brushwood, which at that period covered the hill, until at length the entire rout, except the last rider, who lingered a few yards behind the others, had gone by. “What are you, little manie? and where are ye going?” inquired the boy, his curiosity getting the better of his fears and his prudence. “Not of the race of Adam,” said the creature, turning for a moment in its saddle, “the people of peace shall never more be seen in Scotland.”‘

Touring Wales in late Victorian times, Professor John Rhys was several times told that fairies were no longer encountered in the countryside.  They had been seen ‘daily’ by shepherds “in the age of faith gone by,” in the “fairy days”- but no more (Rhys, Celtic folklore, pp.115 & 125).

What drives fairies away?

The reasons for the fairies’ departure tend to be related but curiously antagonistic: 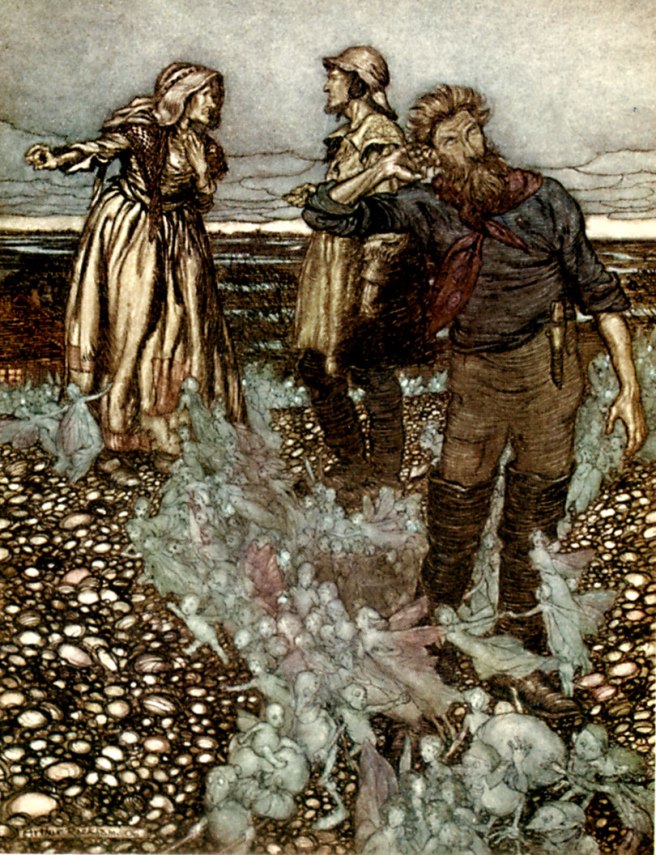 The combined shrinking and retreat of fairies and their realms reached a point in the twentieth century where many writers could declare their epitaphs.  For example, in Puck of Pook’s Hill, published in 1908, Rudyard Kipling has his character Puck admit that “The People of the Hills have all left.  I saw them come into Old England and I saw them go. Giants, trolls, kelpies, brownies, goblins, imps; … good people, little people … pixies, nixies and gnomes and the rest- gone, all gone!”  (p.10).  Katherine Briggs began the first chapter of The fairies in tradition and literature by observing how, since the late Middle Ages at least, fairy beliefs “have been supposed to belong to the last generation and to be lost to the present one,” but still the tradition lingered on.  However, she seemed to have lost heart in The anatomy of puck (p.11), admitting that “the fairies, who descended perhaps from gods older than those the druids worshipped, who were so long lamented as lost and so slow to go, have gone, now and forever.”

Nevertheless, the announcement of the demise of faery may have proved premature.  As Janet Bord wrote in Fairies- real encounters with little people (1998), “the changes that have occurred in this century have not resulted in the complete extinction of the fairies: they have survived, because people still see them.” The changes to which she referred are the impact of technology, the loss of importance of traditional beliefs and the loss of traditional knowledge.  The cultural influences of the media and a decline in sympathy with the natural environment has led to a diminution in fairy belief, but not its destruction.  For many people, “fairy lore is still alive in the background of their existence.”

The rise of alternative spiritualities has definitely contributed to this tenacity of belief.  In his book on the Cottingley fairy photographs, The coming of the fairies, Sir Arthur Conan Doyle quoted with approval from the writings of Theosophist Edward Gardner.  The latter wrote that:

“For the most part, amid the busy commercialism of modern times, the fact of their existence has faded to a shadow, and a most delightful and charming field of nature study has too long been veiled. In this twentieth century there is promise of the world stepping out of some of its darker shadows. Maybe it is an indication that we are reaching the silver lining of the clouds when we find ourselves suddenly presented with actual photographs of these enchanting little creatures- relegated long since to the realm of the imaginary and fanciful.”

Gardner, Doyle and Geoffrey Hodson all waxed lyrical in the early decades of the century about beings existing at ‘higher levels of vibrations’ and similar.  They renewed the foundations for a belief in the existence and visibility of fairies which persists.  Diane Purkis in her book Troublesome things (chapter 10) was harsh on modern manifestations of fairy belief.  She wrote scathingly that a “few sad, mummified Victorian fairies survive, pressed in the pages of the Past Times catalogue, perhaps.  Some people are devoted to these little corpses, tending them devotedly, but they obstinately refuse to flourish, they have no roots and no branches, no real resonance.”  She rejects these remnants as being mere “revenants, wraiths, sad simplified ghosts.”

I will leave it to readers to decide on the validity of these dismissive words.  A glance at the abundance of fairy websites, and the shops and magazines offering a wealth of fairy related products, must give some reason to doubt Purkis’ scorn.  It would not be wrong to agree with Katherine Briggs that fairy tradition at least lingers, even today; perhaps, in fact, a more vigorous verb is justified- burgeons, perhaps?