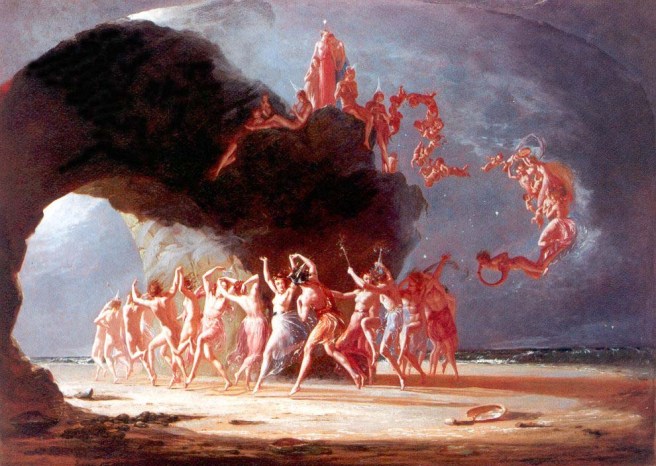 This post strays a little from my chosen theme of fairy lore into wider British folklore.  However, given the recent publication of my new fairy tale Albion awake!, I wished to set William Blake’s ‘fairies of Albion’ in a fuller mythological context.

The land of Albion

What and where is this land of Albion?  How has this mere geographical name become imbued with so much symbolism?  Author Peter Ackroyd has written that today Albion “is not so much a name as the echo of a name.”  To understand how the term became freighted with significance, we need to travel back centuries to its origins.

The name appears to be derived from one of three proto-Celtic stems.  It may mean ‘world’, as in the Gaulish/ Galatian albio (see modern Welsh elfydd, early Welsh elbid meaning ‘earth, world, land, country or district’).  Secondly it may denote ‘white’ (as in Latin albus), though not in the sense of the white cliffs of Dover, as is often suggested, but more likely to suggest the world of light above the surface  of the earth as contrasted to the dark underworld.  Lastly, Albion may mean simply ‘hill’ or ‘highland’.  It would then be linked to the root of the word ‘Alp’ and also to the Gaelic Alba, the name for Scotland.

Whatever the exact origin, the place name was commonly known throughout Europe from a very early date. The first reference is in Avienus’ Ora maritima which dates to the late 4th century BC.  Various other Latin and Greek writers used the term until it was displaced in Roman times by Britannia as the preferred name for the British Isles.  Nevertheless, King Athelstan in 930 chose to term himself ‘Rex … totus Albioni regnis’ whilst his successor Edgar went further, declaring himself ‘Totus Albionis imperator.’

The name Albion therefore has a long and distinguished toponymic pedigree and was for many centuries a sober and unremarkable label.  It was only in the early 12th century that it gained its legendary associations, thanks to Geoffrey of Monmouth.  In his History of the kings of Britain,  Geoffrey alleged that the island was called Albion prior to its conquest and renaming by Brutus, who fled the fall of Troy (Book I, 16).  Subsequent writers propagated a tale that the island was inhabited by giants and that their queen, Albina, gave it its name.  This story of giants settling the land was repeated by successive authors, including Wace, Layamon, Holinshed, Camden and Spenser in The Faerie Queen (IV, 11, 16).  John Milton told the story in his History of Britain (1670) .  In Book I he recounts that the land was “subdu’d by Albion a Giant, Son of Neptune; who call’d the Iland after his own name, and rul’d it 44 Years. ”  He adds that the island was later settled by some sisters and that “The Eldest of these Dames in thir Legend they call Albina; and from thence, for which cause the whole Scene was fram’d, will have the name Albion deriv’d.”  The effect of these works was to transform the perception of ‘Albion.’  No longer was it merely a name- it had become redolent of national myth and stirring legend.

It is probably from Milton, or perhaps Spenser, that William Blake derived his knowledge of the legends of the giant Albion.  In his hands the figure is progressively elaborated. Initially Albion is representative for Blake of primeval man, an ancestor or patriarchal figure, ‘father of all mankind.’  Subsequently Albion became husband of Britannia and father to Jerusalem.  His rejection of Luvah leads to the diminution of his senses, his sickness and his sleep.  In the poem Milton Albion’s awakening is linked to revolution.  As such, Albion as a personification of Britain is shown rejoicing in his political awakening and liberty in the illustration Glad day.  For Blake, the ‘sleep of Albion’ was the suppression of the imagination by materialism; when Albion awakes he has been freed and transformed by the possibilities suggested by the American and French rebellions.  For more detail see S. Foster Damon, A Blake dictionary (available on GoogleBooks).

It was Blake that imbued Albion with a fresh and radical sense and it was his conception of Albion as a political entity that resurfaced in the 1960s and 1970s.  The ‘Albion Free State’ was a libertarian and hippy conception, in favour of free love, free festivals, natural birthing and much more.  For the Windsor Free Festival, on August bank holiday 1974, a free state newspaper was produced which contained a draft national anthem for the new polity.   It begins thus:

For the October 1974 general election Albion Free State produced what they self-deprecatingly labelled their “kind of Alternative State manifesto.” It called for Blake’s head to replace that of the queen on bank notes and declared that “Albion is the other England of Peace and Love which William Blake foresaw in vision- a country freed of dark satanic mills and Big Brother machinations…”  The writers of the manifesto wanted to create “a network … of independent collectives and communities federated together to form the Albion Free State.”  Life would be organised at local level, by neighbourhoods and workers.  The new nation would take over waste land and waste buildings for “diverse needs,” the manifesto noting that “The ‘true levellers’ in 1649 grew corn by taking over common land.”  This may at first glance have sounded like the product of a bunch of stoned hippies, but the authors had plainly read their literature and their history and they understood both their antecedents and the value and power of deep rooted cultural symbols.

In my recently published fairy tale, Albion awake!, I make use of both Blake’s conception of the sick isle of Albion and its need for salvation and the 1960s radical project for a polity within a polity.  This is still not an obsolete idea: on April 7th 2012 the Albion Free State was launched as a self declared anarchist community with permanent territories within the British Isles, in Scotland and west Yorkshire.  The aspiration to live in a leaderless community that is self-determining and free continues to have vitality, just as does the vision and poetry of William Blake, which can provide the basis for boundless inspiration and interpretation (see https://mw.micronation.org/wiki/Free_State_of_Albion for more information).

For more details generally on Albion and my other interests, see my separate blog at johnkruseblog.wordpress.com.  I have discussed there issues of King Arthur and the fairies of Albion.