This latest posting examines the poet William Blake’s conceptions of fairies.  This is to mark the publication of my latest book, Albion awake, a fairy story for adults that features both the Fairy Queen Mab and William Blake amongst its cast of historical characters.

Blake had a very clear vision of the nature of fairies, although these thoughts were frequently unique to him- not an uncommon situation in the complex mythology that he elaborated over the course of his life!  Blake spoke of “the elemental beings called by us by the general name of fairies.”  From this it seems clear that he did not conceive of a single class of supernatural being, but of complex variety- as if, of course, the British conception of fairy-kind. 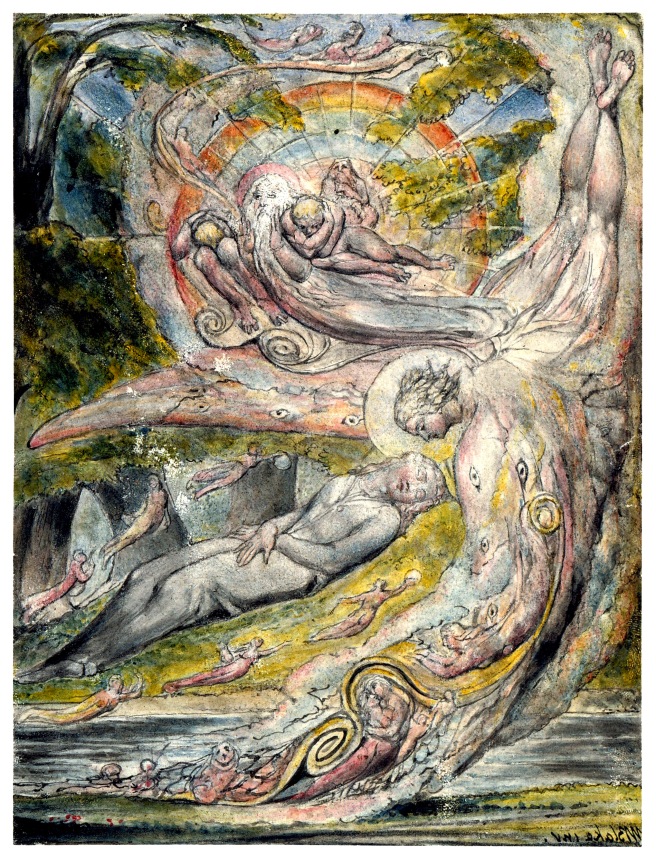 Illustration to Milton’s ‘Il Penseroso V‘- Milton dreams of “six spirits or fairies, hovering on the air with instruments.”

The character of Blake’s fays

In his verse, Blake’s fairies fulfil a number of functions:

“The good are attracted by men’s perceptions,/ And think not for themselves;/ Til experience teaches them to catch/ And to cage fairies and elves.”

“Knowest thou not, O Fairies’ lord,/ How much to us contemn’d, abhorred,/ Whatever hides the female form/ That cannot bear the mortal storm?/ Therefore in pity still we give/ Our lives to make the female live;/ And what would turn into disease/ We turn to what will joy and please!”

The verse ‘The fairy’ treats the supernatural creature as ‘king’ of the marriage ring.  It appears that Blake saw the emotional and physical obsession of love as some sort of spell that has to be broken.  This link to carnal pleasure also seems to feature in his poem The Phoenix, sent to Mrs Butts in 1800 after the move to Felpham. Blake contrasts a fairy to the innocence of children playing.  The phoenix flees the sprite for the company of the children and-

“The Fairy to my bosom flew/ weeping tears of morning dew/ I said thou foolish whimpring thing/ Is not that thy Fairy Ring/ Where those children sport and play/ In fairy fancies light and gay?/ Seem the child and be a child/ And the Phoenix is beguild/ But if thou seem a fairy thing/ Then it flies on glancing Wing.”

These quite individual conceptions of the nature of faery were elaborated  by the poet from pre-existing folk materials of long standing.  We have just seen mention of fairy rings and, in one very significant respect, Blake did not depart at all from conventional imaginings of fairies: his creatures are always very small.  There are numerous examples of this:

Blake’s vision as, of course, a highly personal one and we would seldom be well advised to treat his version of fairy-lore as an authoritative guide to what his contemporaries believed about the supernatural world.  Nonetheless, it is a fascinating and coherent conception and a notable element within his overall philosophy.

My interpretation and use of Blake’s fairy lore, my new fairy tale Albion awake!, is available to purchase through Amazon as a Kindle or paperback.  I also intend to make related posts separately on johnkruseblog.wordpress.com.  An expanded version of this posting is found in my book British fairies (2017).

I have discussed William Blake in several other posts: I consider his views on fairy origins, on the nature of the magical realm of Albion and how Blake’s art and poetry has influenced later generations of artists, writers and visionaries.

8 thoughts on ““Full of Fairy elves”- William Blake and fairies”